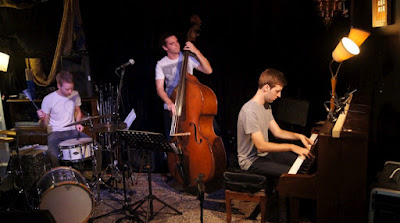 Moving Paths was a gentle, undemonstrative name for a band, suggesting fluidity and perusal. For the first notes, Moving Paths was like this. They are students from the Jazz School pre-darkness. Max went off to the Sydney Con and perhaps Luke did too. Linus studied at ANU then off to the Con. They were on their first tour with the new band playing Smiths then Hippo then Victoria and ultimately MONA. They play a gentle and pensive music, intensely listened, not extravagant except maybe once when Max played impetuously for resonances over open strings.

Just one or two walks, several obbligati, some solos of cymbal and brushes. I so much imagined it as recorded, perhaps a soundtrack for a long, relaxed road trip. Everyone writes - one from Luke, 3 from Max, the rest from Linus (keys always have this advantage) - and one tune from a shared admiration, Paul Motion. First up was Max's Rolling with bass obbligato at relaxed tempo and sounding all the world of the '70s. Trajectory was all sizzling cymbals and slow changes and arpeggios. Linus' Slow was a slow sparse melody to start, but developed into a livelier walk. Max followed with another sparse one for Phil Treloar. I was noticing the piano - acoustic but not too tuned. Several more sparse, open wistful tunes, Walks and Dawn, and a few with unison melodies, notably one for Louis, Linus' dog, and somewhat surprisingly, a relaxed latin called Portrait, again by Linus. Like others, it developed into tinkling water drops into river, cymbals and openly timed piano chords. Not anything to dance to, but intense and satisfying and a listener's space. Worthy of trips in the club with closed eyes or as accompaniment for a real, interminable road trip: the name says it all.