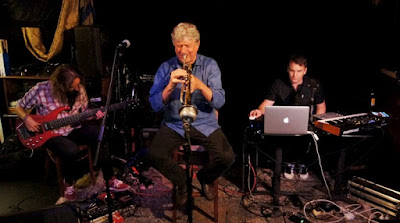 No set list required. Pensive Phish were in their F3 incarnation, meaning three players: Mark, Miro and James. No set list because no key, no changes, no whatever - at least nothing preplanned - other than perhaps some starter drum grooves or crying babies and others (yes, a strange start for one tune). But these are such good players that even when they amused themselves with their indulgences, they were still playing fabulous grooves and wildly delirious tones and the rest.

James joked that he had 3 loops going at one time and he had to turn off the effects to stop the last. And what effects! Some obvious ones, if neatly melded with the rest, and some unhinged ones, synths or ring modulators. And with James' rock solid funky feels and lithe fills and the rest. Then Miro with just his one pedal, a wonderfully effective harmoniser, but also percussion and a few mutes (not least the Miles mute, Harmon with no stem), playing some fabulous improvs, moving through harmonies, wistful or determined. And the electronics from Mark: a laptop with a trigger pad and a Mopho x4 synth and feeds from James and Miro and a mic. All mixed and merged and mangled as base and expansion. All fabulous, intriguing, meditative or deeply grooving, playful (always both playful and serious) and entrancing and enveloping. I rocked along with deep grooves and followed solos with appreciation and mischievous tones and tunes with awe and a few smiles. Great stuff and worthy of a few chuckles from the players after given the exhilarating audacity or it all.