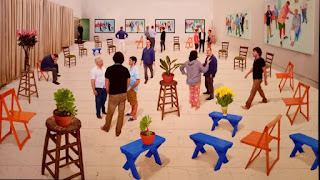 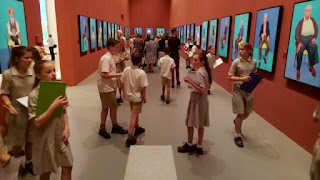 David Hockney is a star of contemporary / pop art with his colours and Californian light and water splashes and English background and gay sensibility but he's never been a particular favourite of mine and I remain largely unmoved after seeing a display of his works from the last decade at the National Gallery of Victoria (NGV) in Melbourne. He's taken to using iPads and iPhones (using the app Brushes) to produce quick and colourful and sometimes revealing works. There were lots of these. Most interestingly there were many examples of his works being created in front of your eyes, on an iPad or TV screen. Presumably the app records the creation process and can rerun it. There's undeniable eye and composition and skills here and it was quite a learning experience to view an image go from blank screen to finished work. The electronics allows for quick and prolific creation, something like an update of the printing process and perhaps even more prolific. I was surprised to see the works on display were advertised as "over 1,200". There certainly were lots, although I'm not sure how they got to this number. There were household and local scenes, a series on Yosemite with obvious references to Ansell Adams, a long series of sitters (seemingly on one common chair) in a similar blank space. These were portraits in acrylic, all rough and lacking detail although clearly showing character and a good eye. Then a few large works formed collage-like from photos (for me the most welcoming pictures of all) and a final room of four screens in nine parts of four seasons in one English forest (Woldgate Woods in Yorkshire) captured with 9 cameras mounted on a moving van. Pretty but ho-hum to me. Hockey clearly has a great eye but his ill-defined images often disappointed me and a claim to significant art from a moving van carrying 9 cameras just left me cold. An interesting recent retrospective but no great revelation to my eyes.

David Hockney works from the recent decade were displayed at the National Gallery of Victoria.
Posted by Eric Pozza at 3:09 pm