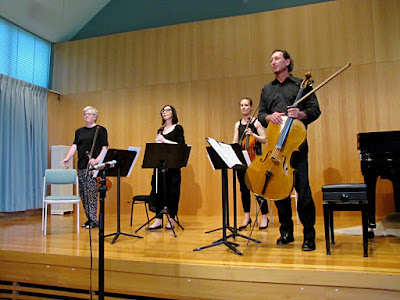 Barbara Jane Gilby noted one of her sayings "No practice is ever wasted". She was introducing the Canberra Strings, a new string quartet formed to visit New Zealand as musical ambassadors. Another earthquake intervened and the tour was called off at the last minute, but at Wesley we got to hear a program of modern Australian music prepared for this tour. The music was from 1912-2002. The composers were Alfred Hill, Peter Sculthorpe and Graeme Koehne. The music was widely varied. I also enjoyed hearing these players, who I've heard mostly in the context of a symphony orchestra, so a big group, in the intimate setting of a string quartet. Each individual with his/her own independent role and leading statement, but all merged into a compositional unity. And each with a clear voice, emerged from the melded symphonic tone. The Alfred Hill was from the Carnival, so light and pleasurable. The Sculthorpe was anything but. His String quartet no.6 was dedicated to Bonny Drysdale, a friend recently deceased. It is sombre, with movements marked Lento molto, Lento and Lento. There was some intriguing harmonic colour here, painful statements from the various strings, some rhythmic interest, but heavy going. I enjoyed the Koehne most, Whirling dance, from his String quartet no.2 Shaker Dances, all odd times and mingling tempos and simple joys. You could feel the interest and raw newness of this group with music that seemed still new and developing and this was part of the excitement. They formed in October at the request of government, so this is a business proposition amongst the artistic purposes, but no loss there (much music is and has to be). I enjoyed this immensely and look forward to future outings, for the players and the localness and the interesting music they unearthed, but also for the exposed musicality of the string quartet format.

Sounds like a concert I would have enjoyed. I rather like Koehne - the little I've heard. And I do like Sculthorpe but he wrote a lot and it varies greatly in accessibility, style and tone doesn't it. Lento (whatever), Lento and Lento, certainly sounds as though you'd have to be in the mood.