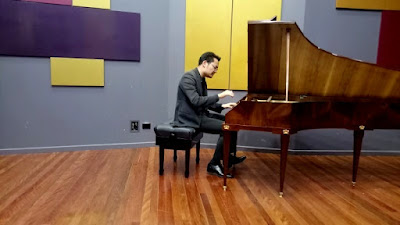 I guess we are being introduced to the new staff. The other day was Stalin's piano by pianist Sonya Lifschitz. Monday was three Mozart piano sonatas on period instrument by Mike Cheng-Yu Lee. It was stunning. All played from memory. Introduced with a chatty talk that skirted around issues of the piano relevant to an era, of Mozart's style and approach and even his toying with tunings. This is pre-equal temperament, so some keys are sweeter than others: Mozart used this in his writing, moving out into dissonance and resolving to sweet keys. Somewhat like jazz players with dissonance, but ours is not just dirt but rocks. The sonatas on this night were Cmaj K.330, Bbmaj K.281 and Cmin K.457. I think it was the last that was the play with dissonance. Mike took one as a foundation for variation and improvisation, in response to Mozart's improvisatory approach. Very impressive. The piano was Paul McNulty after Anton Walter (Vienna ca.1796). Mike obviously works the period pianos: it was interesting to hear a recognition of Geoffrey Lancaster's collecting. So, a fabulously intimate concert with both delicacy and immense charm. Mike will be playing all the Mozart sonatas over coming concerts.