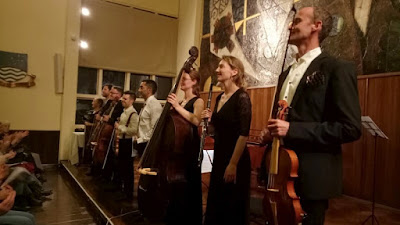 I was back in Canberra and so was the Australian Haydn Ensemble. This concert also continues their work with Neal Peres Da Costa. Together, they are recording the Beethoven's piano concerti, but in a new way and often with new arrangements. Apparently, Skye and the group were intrigued and enamoured by the arrangements of Cimador. They are obscure (the diminutive entry on Cimador in Wikipedia is just proof) but the arrangements are intriguing, true to period and suit AHE, so, with the help of Australian arranger, Mark Vi Kim Ling, they are performing and recording Beethoven piano concerti in this style. The results are intriguing and attractive. On the night, AHE played Beethoven Concerto no.5 Ebmaj 'Emperor'. I played this with NCO earlier a few months back, so I know it reasonably well. Even with similar orchestration, it's fascinating how a piece changes, how new ideas appears and prominences change. Here it was so much greater, like a new vision of the work.

The arrangement has parts taken by different instruments, and apparently this is annotated, so a viola line maybe be identified as from oboe or clarinet or whatever. Cimador's forces were two violins, two violas, cello, bass, flute and keyboard. The cello and bass seemed to just take the known lines, presumably also the two violins for the two violin sections, and, I thought, the piano, but the two violas and flute presumably took on any number of lines from woodwinds or brass or whatever. So it was a fascinatingly different but similar piece. So what else did I note? The whole was sweeter and more open than an orchestra. AHE do great dynamics, but still gut and pianoforte doesn't manage the extremes of modern instruments. The tonal colours of lines changed with the different instruments playing them. The violins and flute were a bit quiet, but maybe that's from where I was sitting. There were also odd tones from odd combinations, eg, flute and cello. These are great musicians and I enjoyed the playing immensely. The bass and cello are a firm and committed block and often prominent - Jacqueline's pizz was particularly effusive - and their application was a pleasure. This group always enjoys itself with smiles all round, but I've noted that before. Some interpretation was unexpected, like the slow take on the early part of the third movement. That surprised me but it was effective. And those lithe runs from the strings and complex plays between hands by the piano. All a huge pleasure and intriguing. Otherwise, they played Mozart Symph no39 Prague and Overture to Magic Flute. More staid than the challenging Beethoven but with their own challenges, not least with some devastating lines. So a great pleasure for my return.