Great players on a great day 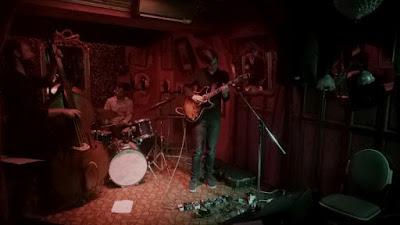 I caught Trio Klein Ahnung in Sydney, at Lazy Bones in Marrickville after missing their gig at Molly's in Canberra. They were a fabulously modern, lithe, expressive band, understated at times, explosive at others, all powerful musicians in their own rights but all ready to lay low when the music called. I chatted after the gig with some of the Canberra contingent, now mostly out of town, in Sydney or even as far off as Berlin. Brian Blade and ambience were mentioned as similar or stylistically influential. Yes, but. Carl is so strong and, being the guitar, the front liner in a guitar trio and he was the patter of the band on stage. I heard current Manhattan guitar but wasn't sure which one. A quick survey identified Kurt Rosenwinkel as the closest to my ear. Strong and defined notes, devastating runs, softly overdriven with some reverb or echo or both (my guess). Sam was at his expressive best, often understated, hugely expressive in lines and just nicely explosive with his own devastating runs, just sometimes. Raj was hugely understated, soft and delicate, taking just a few solos, demanding us to listen carefully to follow his delicacy. They were releasing a CD on this tour with some tracks including Sean Wayland. So this is Aussies in the world: NYC, Berlin and home. Suffice to say I was enamoured by the gig in Marrickville. They played tunes from the album but also a few standards: How deep the ocean and Without a song. I tried to count How deep... at Marrickville but failed. I noted "oddly timed", thinking they'd changed time signatures from the swung 4/4. So what a surprise when I saw a video of this same tune from the Molly gig and hearing it as a clear four. My guess is this was time implied, held in the musicians' minds but far from clearly stated, rather than formally rewritten passages. I feel it in our trio at its best, usually when we're playing pretty frequently. Time dissolves but doesn't: it's there but not evident; ready to resolve occasionally. What appeared as time rehashed was an improvised interaction. Wonderful, exemplary and a statement of the contemporary in jazz. At least to my ears. (Carl, have I got it right?) So, a great gig at a lovely, dark, seductive venue (worth a visit for the design ambience alone). Thankfully, I didn't miss this one. BTW, klein ahnung translates as "little idea".

Trio Klein Ahnung are Carl Morgan (guitar), Sam Anning (bass) and Rajiv Jayaweera (drums). They performed at Lazy Bones, Marrickville (and Molly's) while touring their new album.
Posted by Eric Pozza at 11:35 am