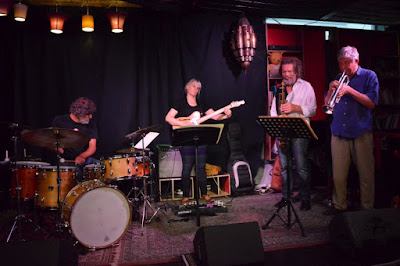 Spartacus was the gladiator who led the Third Servile war against the class-owning oligarchy during the Roman Republican era. Thus does Ronny model himself, the servile drummer at the whim of the overlords. As a bassist, I think he might have something there, but of course it's in some jest. The serious intent is to centralise the drums in this music, so the Spartacus Collective is a "quartet of solo drumset with instrumental accompaniment". Intriguing! They were to play at the Sydney Festival but that was canned. Lucky for us, because they played Smiths and it was intriguing and enveloping music, largely improvised although gathered within some indicative written lines or harmonic concepts (Two up, two down featured melody in two keys) or rhythmic grooves. It must have served Ronny well, because I think this is the most exciting I've heard him. Maybe in part because some of his drum influences got airings: To Elvin (as a verb) is an obvious reference but another to the "big, spacey, rich" drumming on Bruce Springsteen's Nebraska album is not so obvious). Each player had charts, but the improv was long and evident. Jess was excellent at setting the space for this, regular in form with occasional punctuations and embellishments, clear in tone and often quizzical in melody and often counting in changes or recurrences of a melody. John and Miro were their fully expected exploratory selves: thoughtful, informed, searching for relevance. The fairly rare "heads" featured harmonies between these two front-liners. My guess was John improvised harmony to Miro's melody, but not sure; maybe it was written. It was not a long night: Ronny had five charts and they added an improv leading to a mobile African groove from Jess, her song Jerboa, written about an animal that's shared between South Africa and Australia (and perhaps more widely: do extant animals date back to Gondwana? I must look that up). Interesting, too, that they played without PA. This was wildly exploratory yet not at all disoriented, improvised and clearly authoritative, responsive despite limited instructions. A great night that had me deeply absorbed. Lucky us for Sydney's cancellation.