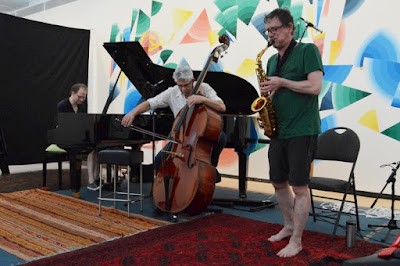 What's the difference between the LNP government and SoundOut? One is organised to do nothing; the other is not organised but does lots. My joke. But there could be other lines: one lies, one doesn't; one cares, one doesn't; one has art, one has PR. It could go on. One has staying power; one destroys it. As in, SoundOut is in is nth year; Australia and the world is entering climate end times. I got to one of two Friday workshops at SoundOut. The band opened: a trio of piano, bass, alto sax from Netherlands/Germany: Achim, Wilbert and Frank. Frank was playing my other bass and it sounded loud, alive, inspired in his (meaty, strong) hands. The interaction was to die for. I'll look forward to hearing them again in concert over coming days. There was discussion after: about personality, not ego, as a requirement; about long term playing and their backgrounds (rock, reggae through some conservatoriums and jazz and some self-teaching); about long term playing, but how they connected from the first time playing together; about tone and techniques; about some more ethereal things, like a performers' playing resonating within as colleague so "all [is] one", or "what he plays is already me", "be empty", time and space and resonance, the end of sounds all merging into one music. And that all the technique needs to be there, ready for instant use, when you are aware the time had passed and "when it becomes a trick [not an imbibed practised capability], don't play it". Then a few small bands playing and comments. I was with the first on piano, performing with soprano sax, Wilbert on bass, electronics. I enjoyed the first part, playing with tonality and atonality and intervals and trying to listen. Perhaps we didn't realise an end, but then I'm not sure we understood the expectations and norms of the performance [certainly I didn't]. Comments were about listening, dynamics, interaction, knowing an end. Mmm. Interesting, I must do more, and piano (or this piano) feels good for me for this music. Bu these are just my mutterings. Next group was alto, flugelhorn, e-bass and electro-acoustic percussion. Again, finding the endings and relating (as in dancing together) were the big comments. They have ears, these players. We can test ours further over the weekend.