The history lesson that is jazz 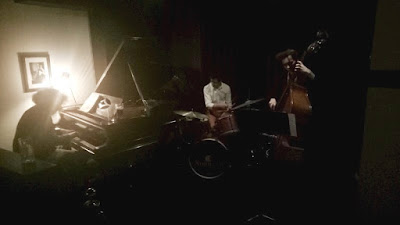 Jazz changes and develops through generations of players listening and learning and standing on Newtonian shoulders. I could only think that seeing another generation tonight. Evans Room is a piano trio with Adam Davidson, Hugh Magri-Bull and Evan Marshalsey. They are not even the newest generation, being variously out os school or at ANU studying, but they take their places in the history. Apparently Adam is off to Monash to study jazz. He's wonderfully capable player already and just out of school, not yet into tertiary studies. Skills like that show up early. Hugh and Evan are no slouches, at various parts of their ANU studies. I hear Hugh is an encyclopaedia on jazz performers in history, so he listens and thus learns. Another worthy - and the traditional - approach. Both were lively and informed and interesting in their accompaniment and solos. So, the traditions continue, even as this trio goes its own way. They played standards and again developed and interpreted in their own styles, again as in history. I hear their mates are slogging through the jazz studies but performing metal and funk and the rest. So jazz school is a place of integration or tolerance these days. Maybe that's different? Dunno. But whatever, they played well.