They are big names to have here in Canberra, at our NGA, Matisse and Picasso, but I was surprised at just how much came from our own collection. I recognised a few of the works but not all that were ours, maybe because they were mainly prints, interestingly a few times in book form, so perhaps not quite so memorable. And there was a mix of 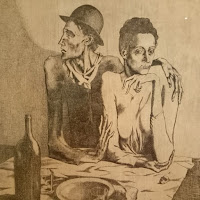 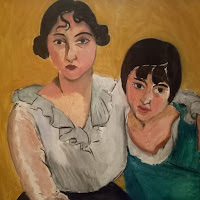 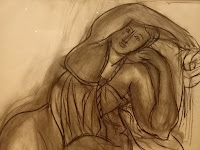 other works from overseas collections - Tate, MOMA, Paris Picasso, Baltimore, Minneapolis - and local - Sydney and Melbourne and a few private collections. We'll never get masses of these works on loan (not like the modern gallery in Cologne with its collection of 900 Picassos) but this was decent while not too big, with various periods and various influences outlined back and forth. The key theme was how both these artists watched and were influenced by each other through their careers. Picasso has to remain the more challenging or more intellectual of the two with his cubist distortions and extrapolations and minotaurs. At first sight, I preferred the more sensual simplicity of Matisse (not to deny Picasso!). Nice, too, to see costumes from both of them designed for the Ballets Russes. But it was in the last room that I got the most telling vision. It was an opened book with a few whispy, squiggly lines from Matisse (excuse my pic) that so clearly described a woman's body (very few men appeared in this display!). I was stunned by the effectiveness of so little and the required craft to carry it off and the desire that obviously underlaid it. It was the old "my kids can do that" moment blown out of the water. Just a revelation.

The Matisse & Picasso exhibition is at the National Gallery of Australia until 13 April.