Catholics getting it right 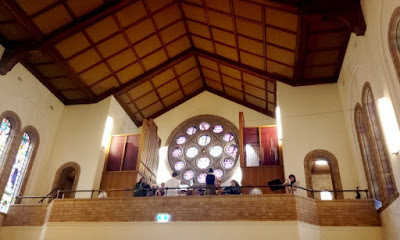 Christmas Mass is an annual pilgrimage with my Mum. This year she's over in Canberra and mass was at St Christopher's. Not the midnight mass, but the 11am mass which I guess is the same: longish and musically accompanied, and this time a huge musical pleasure. I always enjoy singing along to hymns, but these renditions had me stopping to listen. The tunes were obvious enough: O come all ye faithful, A little town of Bethlehem, We three kings, The first noel, Away in a manger, Silent night, Hark the herald angels sing. There was a responsorial psalm and a few other snippets of musical fillings. We were provided with words so invited to sing, at least with the obvious hymns. That was easy enough until the sopranos went stratospheric and complex with lovely counter melodies that I recognised but couldn't sing but admired as deeply satisfying. They got the high notes then proceeded to confound and impress with several more great arrangements. The organ was lovely and Julie Watson on trumpet featured so sweetly with gloriously soft tone and delicious counterpoint. My God! ... a response that's apt and fitting. It was maybe a little unexpected but apt in a modern, casual mass, that the parishioners clapped the music when the mass was over, then hooped and hollered after the final Handel, admittedly the mega-popular Hallelujah chorus, but done with real aplomb. I expected to enjoy some singing (if the key was right - I've found keys often haven't suited me at Catholic masses) but I was blown out by the effectiveness and satisfaction of this mass. I wasn't the only one who laughed at the joke that the Catholics don't usually do it so well. This time, they did in spades. Congrats to Julie and choir and organist.