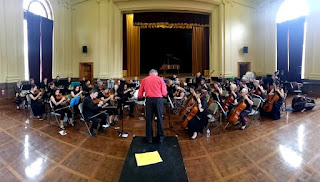 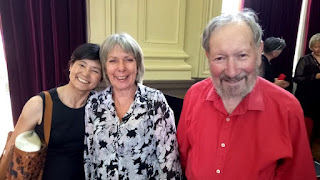 Never let it be said that Maruki shirks. I've said it before and this latest concert is just further proof: Dvorak Slavonic dances 1,2,8; Gershwin Rhapsody in Blue; Tchaikovsky Symphony no.4 Fmin op.36. Anne Stevens soloed for the Gershwin then took up her normal position in the violas. The turnout was good with visitors from NCO and elsewhere and the audience was solid, partly there for Gershwin. It's a popular piece, and as I recognised while Anne worked through the syncopations and diverse key signatures, not easy. It wasn't too bad for the orchestra (although I was pleased to get the offbeat triplet scalar runs towards the end: they were a doozy). The big challenge was kept for the Tchaikovsky, especially the first movement. At first blush, the fourth movement looked scary with its quick semi-quaver scalar sequences, but the varied syncopations of the first movement were killers. The time was 9/8 feel at a reasonable speed so that was not the issue but the dotted feels were. As for the bowing, that can await my next take on this very big challenge. The Dvorak was more presentable, as Dvorak seems to be. I never seem to find him an insurmountable challenge. But as always, when John puts on his threatened red shirt, we do our bit. Not perfect but decent and performance is the best way to get to grow accustomed to any piece of music. Again, a big program and a decent take on it.