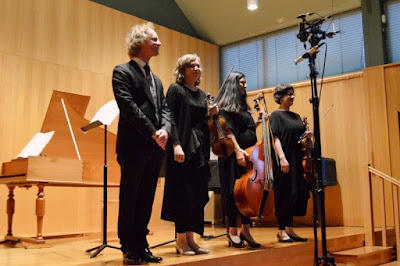 I think the group Latitude 37 is from Melbourne and my check of Melbourne's coordinates semi-confirms it (-37.840935, 144.946457). Lat37 are a baroque trio but they were joined by Bendigo (?) resident Lucinda Moon on a second violin. Otherwise the band is violin, viola da gamba and harpsichord. They did a lovely concert that concentrated on Corelli (Italian, here played with a German harpsichord with good reason that was given). It included three Corelli trio sonatas, a Bach fugue on a Corelli theme, a "dissertazione" on a Corelli work by Veracini and, to finish, a work by Couperin celebrating Corelli at Mount Parnassus with the Greek muses. It's an odd invention but relevant to the times. The concert was fairly short, in one set, with explanatory chatter, mostly for four, but with two pieces for just the core trio. The effect was blissful, all soft gut strings and short movements and fairly simple statements and internal dynamics within phrases and notes, something that appears to my ear more in the style and with gut. It was stately but not evidently aristocratic. Just lovely, personal and immediate. The playing was a pleasure. Interesting, too, to compare the two violins. Visitor Lucinda's was clearly softer than leader Julia's so they were quite distinct and identifiable. I don't expect much Baroque was played at lat.-37 in those days and not quite even at lat.+37. Rome is +~41, but Palermo gets close at +38. Corelli was near enough.