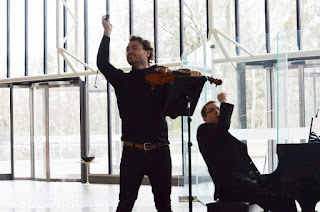 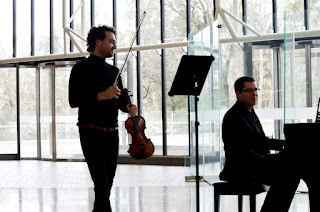 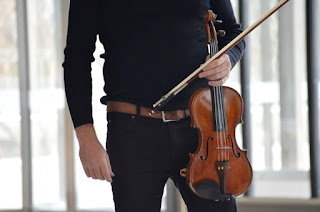 The Phoenix Collective appears in different incarnations and this was just a duo: violin and piano; Dan Russell and Edward Neeman. Thus a collective rather than a string quartet, which seems to be a more common incarnation. Regardless, this was a wonderful concert with excellent performances for a large audience for a High Court lunchtime concert. They were playing English under the concert title "Ye Olde English". It wasn't so old, really. The opening number was by Delius, commenced in 1905 and completed after WW1. That was my favourite. The Lark ascending, Vaughan Williams' mega-hit, and an Elgar sonata followed. They squeezed in a short Elgar for an encore, too, Chanson de matin, although they were over time. Generous. But these are great local musicians, both well blooded overseas but now settled back here. It showed. Dan is the epitome of the involved violinist, moving freely and sensitively with the melody. Edward sits more steadily, but is similarly deeply involved. This is emotive music but with a strong-upper-lipped intelligence and melodies that speak of rolling hills and countryside. Really quite beautiful and deliciously played. BTW, the program was Delius Sonata for violin and piano no.1, Vaughan Williams Lark ascending, Elgar Sonata for violin and piano Emin Op.83 and Elgar Chanson de matin as encore. Another excellent gig for the High Court.

Phoenix Collective performed an English program in the High Court foyer. On the day they were a duo comprising Dan Russell(violin) and Edward Neeman (piano).
Posted by Eric Pozza at 1:14 pm