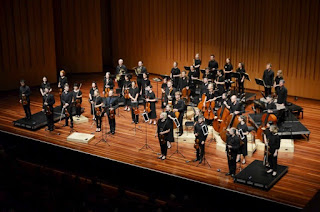 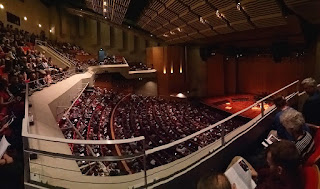 It's Beethoven's year, the 250th anniversary of his birth, so he's out and about in the concert scene. This incarnation was all Beethoven: Symphonies 1,2,3 in one concert by the Australian Chamber Orchestra in a larger format with various invited players, tympany and 3 basses and winds. The strings were expanded with ANAM students to 3 basses (2 additional), 7 additional violins, and larger throughout the orchestra. It was the biggest ACO I've seen and maybe it was required for Beethoven. It was a wonderful concert but I had some reservations. This was the first of the series so it may change by Sydney (5 concerts are planned!). I found the sound not so detailed with the extra instruments, but to be expected and probably quite apt for Beethoven symphonies, but not as clear and light. It was fascinating to hear the 3 together and Beethoven's development from 1 to 3. Nothing I can add but that it was fascinating and the change was evident. From the Mozartian elements of the first, through the developing, fevered forces to the accomplished third. Lovely and educative. We had cheaper seats so limited sightlines so I just closed my eyes and listened: that was a revelation, but tends to be rare when you can see well. Sight is just so much stronger a sense than sound. So a great outfit playing fascinating music from a genius and well attended as Beethoven and the big namers tend to be. A concert-going friend noted attendance with the implication that they/all should play the popular repertoire. But ACO seems to get good attendance regardless. They are worth it: good and sexy to boot. The epitome of the modern classical chamber orchestra. Nice.

Australian Chamber Orchestra played Beethoven 1,2,3 at Llewellyn.
Posted by Eric Pozza at 11:24 am