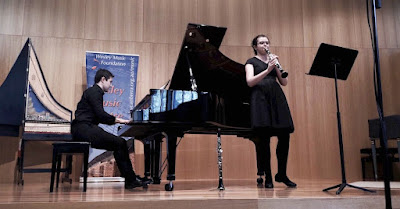 Clarinet's an intriguing instrument for me, I'm told different in fingering from the seemingly similar sax family and definitely different in tone.  They both use single reed mouthpieces, the clarinet has a cylindrical bore in wood and the sax a conical bore in metal.   It was a standard of early jazz, but I don't think I've ever played jazz with a clarinet, other than in a big band.  I play with clarinets in orchestras, tut they are big too.  So gear to hear Helena Maher playing clarinet with Lucus Allerton on piano.  the classical was expected, this being Wesley, and the Mozart movement especially so, but Andy Firth was not.  Andy Firth is well known as a jazz player.  Helena played two solo movements form his 3 pieces for Solo jazz clarinet, a rhapsody and a blues.  The blues might be mistaken for classical, but the blues was obvious.  I enjoyed following it for the bass lines he plays with, mostly common for me, too.   The other music was all duet with piano.  The Mozart was the second movement from his well known clarinet concerto, calm but questioning to my ears.  They opened with a Canzonetta by Pierne, bouncy and filmic then into a passive response.  They ended with a Poulenc piano sonata.  Three movements described by Lucus as of "too many ideas" and movements "screaming British murder mystery", discovery of the body and the chase.  Not sure, but I could feel a story-telling nature to it.  Maybe it was the music or maybe the instrument, but I felt flourishes and quick runs leading to settled notes were a feature of the clarinet and also the piano here.  So I learn something of the instrument even if I remain ignorant of its fingering.  So bit it; well done.