A uniqueness of the French 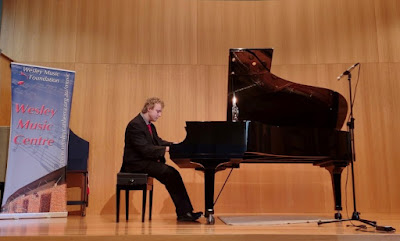 Sam Row has a penchant for C20th French music and it's a killer.  He played Ravel Gaspard de nuit with strange themes and 10,000+ notes in six minutes.  I'd believe it: huge rippling screeds of notes with a melody over, in left or right hand.  I'd hate to see the written music, but then he played it from memory so he doesn't need to read it on stage.  I can only admire his memory.  So what were the themes?  Ondine, the water spirit, sings to seduce a man into her underwater palace and finally turns back into water when he rejects her in favour of a human.  Le Gibet, with a man hanging from a gallows in a desert at sunrise with the sounds of bells in the distance.   And Scarbo, a goblin flitting around a bedroom until he disappears.  Strange stuff, sometimes grim.  After this, a lovely Chopin nocturne was a great relief, beautiful and restful and well known.   And a melody from Ukraine to finish as a short encore.  Again, a beguiling and challenging concert from Sam.