Song then and now 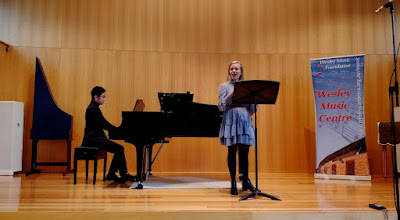 They say Schumann Leiderkreis op.39 is one of the great song cycles.  I've listened to leider and found it hard to love, but I did this one.  Maybe it's the grand vision of a larger work (it's 12 shorter songs on the Romantic experience of landscape); maybe it's the wonderful performance.  It wasn't the words, because I didn't follow the German translation.  This was Rachel Mink accompanied by Aaron Chew and they both did wonderfully.  Strong voice, aware interpretation and effective communication from Rachel with delicate pianism and responsive accompaniment from Aaron.  A very classy outing.  And then to get  another song cycle, this time contemporary, in English and variously feminist and amusing, was just icing on the cake.  This was Susan LaBarr Little Black Book with lyrics by Caitlin Vincent.   Written in the last few years and apparently a product of Melbourne, so there's local awareness and it's in English.  I didn't catch all the lyrics but I did most.  Also, we didn't get it all.  The whole is 6 songs, introduced with the song Five, then John, Vince, Steve and obviously two others.  We missed two boyfriends and it's not yet distributed but it's one to watch for.  I couldn't quite work out where to place it, as feminist or comedic or even desperate, most probably with some aspects of all three, although I expect whatever desperation served another a purpose.   So there was modern awareness but also that romantic vision. What a satisfying outing.