And now for something different and not 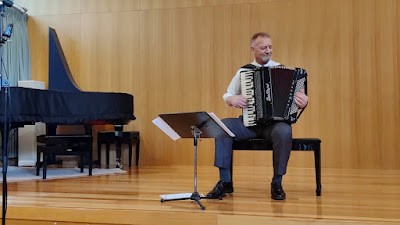 Akkordeon is different but the original tunes that Anton Wurzer played had real connections to jazz and latin and more.  Anton is our our local virtuoso piano accordionist.  I've heard him play classical and all manner of modern and cultural styles.  He played a string of original tunes at Wesley and they had connections with jazz and French and sambas and German folk and gypsy jazz and blues.  And his style of writing is not at all simplified.  These are complex arrangements, changing time signatures and lots of dynamics and tempo movements.  And all played with the sharpest touch, so his semiquavers (would he say 16th notes?) were just spot-on-perfect.  They can be sloppy in many hands, but not on Anton's keyboard.  His left hand, of course, played buttons, chordal-cum-bass accompaniment, and again sharp and correct and nicely distinct from the right hand embellishments and melodies and solos and both hands stopped occasionally for a tapping percussion, again apt and precise.  This is clever music, played with precise fingering and with writing that shows clear awareness of style.  And stories.  So one tune was Lachlan's mood, given a request form co-performer Lachlan Coventry, and Manouche Emma referred to student Emma and Tathra Pub gig referred to a session obviously at the Tathra Pub.  Empress Theadora's dance was a bit further from home, being about Byzantine monarchy and Red samba beans, well, just about food.  So every tune tells a story and all nicely written and quite complex and sharply played.  Not too many really obvious lengthy solos, but the final number, Tathra Pub gig, showed off some classy bluesy improv with quotes from Summertime and American in Paris.  Clever and all round very nicely played.