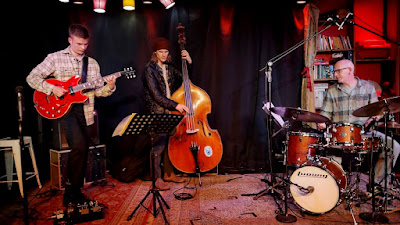 I'd been avoiding potholes while driving or otherwise in a damp and slippery cave all day, so a beer in Smiths went down very well.  I noticed it described as boho and it's spot on.  It could only be better with a seriously satisfying jazz trio, this time led by guitarist Harry Tinney with Paddy Fitzgerald and Nick McBride.  I arrived a few minutes early and they were preparing for the gig.  Harry and Paddy are friends from University but they'd just met NIck that night.  You wouldn't know as you listened, but, as Harry said, it takes lots of personal preparation to be able to just play with new people like that.  The prep on the day was walking through the charts with explanations and short plays to instruct or get some practice on the harder lines.  Then into the two sets, I think all originals from Harry.  Several mentions of Lockdowns (he was in Melbourne, after all) and effects on various people and coffee and cars.  All instrumentals.  A few ballads and a string of jazz numbers.  All sharp, clear, virtually uneffected  guitar tones.   He had a pedal board at his feet but mostly seemed to use a volume pedal, other than for one tune at the end with loops and delays and perhaps more.  But such lovely, intervallic playing, exploratory and intriguing.  Paddy was all syncopations touching on groove, softly toned with an array of synthetic core strings, intriguing in solos and also playful with long intervals.  Nick is back from many years in Shanghai, renowned and admired on any visit.  His chops and inventiveness were a huge pleasure but also his quick intuiting of the song and its requirements.  I noticed him marking his charts before, so there was preparation involved in his creativity, too.  Just a fabulous outing of three wonderfully inventive players with unique charts to carry the event.  And certainly a change after an afternoon of concert bands in a cave.