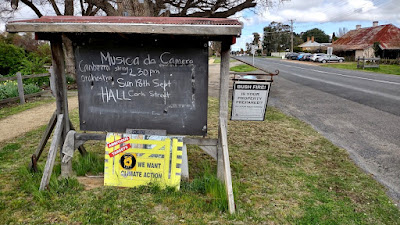 Musica da Camera had its performance weekend.  This one was under Shilong Ye and with an obscure but interesting list of compositions.  Bartok and Delius, and Volkmann, Glazunov and Nielsen.  The last three are pretty obscure even if the names somewhat ring a bell.  Not impossible stuff, but with its own challenges: some odd counts, an occasional 5/4 variation, some solo bass parts that were important, requiring some conscious counting.   We played the standard local outing in Cook, then our Sunday drive was to Gundaroo.  Our recent country performances have been in Gunning, but given the potholes, the closer town was a gift to the suspension.  There were a few last minute swerves from some very scary water-filled potholes along the way.  And the Soldiers' Memorial Hall is a lovely, dark thing with a cathedral ceiling in wood, so lovely direct reverberations.  Warm in temp (given the gas heaters) and warm in reverb.  We played the Saturday well so the step up for the replay was not so large; both were decent outings.  So a satisfying weekend with some decent, lesser known music.