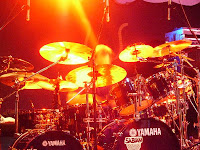 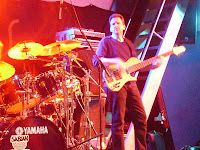 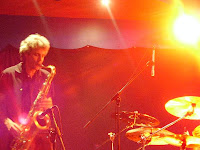 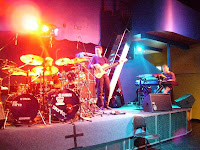 By the end of the night, cheers are superfluous. I’m convinced, perhaps beaten into submission. I announced this performance on CJ as “not my favourite style, but you’ve got to admit these guys have chops”. But I was enchanted, and overwhelmed, and intrigued. I loved this concert. It could be just the sheer abilities. No doubt they had chops – these are world masters in the style and they displayed their skills in great measures. But I was also intrigued by the style itself. Despite a past love for Mahavishnu, Return to Forever and the like, I’ve more recently thought of fusion as “full of sound and fury, signifying nothing”, just a few chords with lots of predictable busy-ness. But I stopped to analyse the melodies, and they were complex, madly syncopated and plain interesting. The rhythms and harmonies were essentially simple and repetitive, but the interpretations were joyful, complex, playful, rich. I could go on. I’ve since spoken to people in two camps: one group was ecstatic; the other was unimpressed. It reminds me of the battles between modern and trad jazz, or between the modern jazz and jazz-rock people when Bitches Brew arrived, or the folkies complaining when Dylan went electric. Perhaps this demeans the arguments; each side has some validity. But to defy the tenor of our times, I’ll choose not to be polarised, and say I loved this concert (while I also love modern, mainstream and other forms).

DWB was Dave Weckl (drums), Steve Weingart (keyboards), Gary Meek (sax) and Tom Kennedy (bass). They played 2 hours of the most energetic music I’ve seen in ages. The tour was called Multiplicity and presumably they were mostly performing tunes from their new album with this title. Their resilience reminded me of a time I saw Chick Corea playing in Adelaide: he played a long set, then surprised me when he said he’d return after the break. DW didn’t even get a sweat up despite the threshing performance he’d given. I had attended a workshop which Weckl gave years ago at the Southern Cross Club. His talk then suggested he and his mates were fit, clean-living music machines, and this just looked to me to be proof (although Gary was seen smoking outside in the cold Canberra winter air). I won’t comment too much on the performances. Get one of their live albums, but discount the fact you’re not there, or you may be underwhelmed. To me, this stuff doesn’t transfer well to a CD. There seems to be a sterility and dullness to the incessant sheets of recorded notes. But live, it was powerful, fluid and overwhelming.

To see these guys in a little club with only about 150 people is bliss. To be able to chat to them after is additional bliss. Someone said a bomb in the Holy Grail that night would have knocked out the whole Canberra drumming community. I’d add a good few of the other instruments, too. This audience was peopled with musos. There was a rush to talk with the stars after the show. Lots of interesting muso chat about gear and the like. Can’t help but be seduced!

Someone mentioned poor communication between players, but I didn’t see that. Tom and Steve were always musically toying with each other and smiling broadly at the results. Gary would glance over above his sax at key points. Only Dave was locked into his instrument, doing his communication mainly by ear.

Tom was my hero (but then, I am a bassist). He flayed his lovely 5-string Fodera (beautiful quilted maple top; standard B-E-A-D-G tuning). Most of his playing was in lower positions, but then he’d move through higher positions, and above the 12th fret for chords, or do chordal runs up the neck. He played slap, fingerstyle with 2 and 3 fingers, and thumb for various effects. No compression; just a few foot pedals (chorus, EQ and octaver, but they weren’t overworked) and Ampeg amp. He mainly just poured out sheets of notes with a Pastorius-like tone. And what notes? You could identify one or two chords below, but there were all sorts of harmonic, chromatic, whole tone and such movements. At one stage, I realised in the middle of a tune (they had been playing for maybe 5 minutes) that this was a blues. They had introduced it as blues, and this was the first really visible referral to the obvious blues structure. How did they do this and hold it together? Beyond me.

Gary on tenor and soprano saxes was a little more reverent of jazz traditions. He was a Garfunkel-looking character off to one side, doing these difficult heads, and blowing power solos. I felt he was lost in a rhythm-section-heavy mix which I felt didn’t do him justice.

Dave was the ever-busy powerhouse, as expected. Head down, sheer concentration. Great precision and delicacy when required, but mostly just ceaseless power and push. Lots of cymbals, lots of double bass drum work (and little jazz hi-hat), lots of triplets and complex partitioning of the beat, but always this incessant, changing understory of rhythmic energy.

Steve was a pixie, playing then not playing, toying with the sounds, often enough taking a solo, mostly piano sounds, but occasionally synth. He was a back-woods man, moving in, changing things, moving on. Just two keyboards, but through a laptop for effects and midi tones, presumably. Interestingly, perhaps 6 foot pedals.

The whole effect was a writhing reptilian barrage of notes. Not discordant and never still. But intense, challenging, overwhelming, vigorous, fast, and damn good fun.

Top class. Don’t miss them next time around, or anyone else of this level that visits. Regardless of the style.

This is a great topic for a discussion. Just click on the blue "Comments" link below and add your opinions. This could easily develop into a flame war, so think before you write and keep it respectful. As administrator, I'll delete any entries that might cause offence. Add your comments now...
Posted by Eric Pozza at 6:19 pm