Jamie Oehlers came with a string of prizes and a matching reputation. He lived up to it. This was another of those magic nights of performance excess. I raved about Dave Weckl a few weeks ago. This was another show on this level, although in a very different genre. 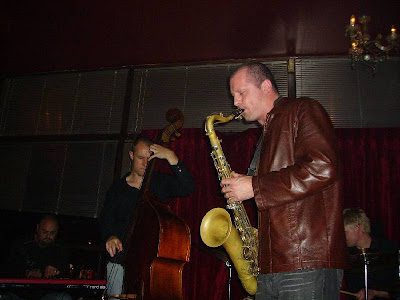 I was sitting very close to the band and the bell of JO’s tenor, so I was able to catch every note. But what were they? Firstly, the sound was rich and rounded, surprisingly so in this field of hard post-bop improvisation. But the notes were the big challenge. He’d often introduce solos with long, fast diatonic flourishes, then launch into streams of harmonic invention that left me dumbfounded. I really was lost for understanding in these harmonies – obscure, changing, profoundly challenging. And patterns based on big intervals (much harder than small) and carried on over long ranges from the top to the bottom of the register. Then you’d arrive at an extreme and realise the tone on that low note was smooth, rather than the more common honk of lesser players, or that high note remained sweet. Amongst all this, his solo lines would cross over the bars and beats, in a way that matched the malleable harmonies. I found JO’s solo performance on a blues less convincing (fast but more obvious) and I felt the first set was the better (maybe the band was fresher – it certainly was intense playing). But this was a master at work, of obvious international standard. I read in the paper the weekend before the concert that Charles Lloyd had led the judging panel for the big sax prize JO won at the Montreux Festival. It was apt. This was a master at work, and of clearly international class.

But he wasn’t alone. I’ve seen Ben Vanderwal a few times recently at Hippo’s. He’s a great drummer – not so much for his chops; more for his immense and endless creativity. He plays a standard kit. It’s got a good sound: hard and full, powerful; smooth, not edgy but not that soft swing tone. And his playing is so much more that swing-style rhythms played well, although they are there too. He seems to have a sense of theatricality that has him playing latin, rock, trad, modern, any style from one bar to another. Just endless change and invention, and a drive and readiness to lift that matched Jamie’s creations. One minute toms, next cow bell (that old hoary thing), then mallets, whatever. Ever changing. Great solos too. This is someone I didn’t know of at the start of the year, but now he’s an icon.

The others were no slouches either. Sam Anning holds it together, as bassists do in this style. But his fills were neat and sharp, and his solos matched: well pitched and with a great woody tone. I was looking for his amp, and it was this little diminutive thing at his feet – uh, new tech! Sam Keevers was another name I knew of, but hadn’t heard live. He was a bigger guy sitting over this small, red keyboard, with a Roland 60w bass cube for his amp. But it was a great piano sound that he got, with occasional lapses into effected piano and synths. It reminded me of Herbie Hancock’s inventions in ethereality and groove.

The music was largely original – presumably mostly by JO, although one was announced as by Sam Anning, and they also played Coltrane’s Dear Lord, and I loved their rendition of Ornette Coleman’s Blues Connotation.