The Luke Sweeting Trio played for the last of the Jazz at the Gods series last night. LST are Luke Sweeting (piano), Hannah James (acoustic bass) and Ed Rodrigues (drums). Luke and Ed are 2nd year students at the CSM Jazz School, and Hannah is a 1st year student. The quality of the concert is a measure of the output from the Jazz School, and congratulations to both the band and the school. 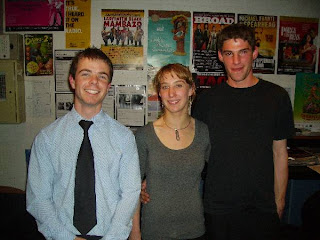 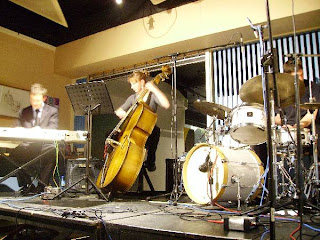 LST played two brackets of standards. I loved the choice, and I learned the titles of a few well-known but unidentified melodies. Tunes included Lullaby of Birdland, You don’t know what love is, Sandu, Groovin’ high, Stella…, Softly as a morning sunrise, Whisper not (including the rarely-played march in the C section) and Wayne Shorter’s Deluge. It was an oddly conceived but fascinating version of Autumn leaves that they played, and I was taken by a down-home bluesy version of Blue monk. But I especially loved their take on Invitation. It’s a great latin tune and a favourite of mine. They played it later in the night when they were warmed up and more relaxed. It was a complex rendition, with lots of variation, moves from latin to swing and back and plenty of solos passed between the players. Lovely! Then the encore of Bird’s Scrapple from the apple demanded all their chops to finish the night.

Luke played lines from the heart of the tune: always defining the underlying movements, although often enough challenging with moves out of the strict harmonies. Hannah played solid and ever-reliable rhythm section lines in latin and walks, and was always right on the harmonic and rhythmic structure. And despite her obvious concentration against double-time and bebop walks, she continued to mark the tune out clearly. Ed provided a solid underlying rhythm with cymbal colours and interesting solos. He amused me with two solos where he played the tune’s melody by changing pitch of a tom by pressing the skin. Synth for skins?

Another proof of the quality of the Jazz School, and a fine way to end Geoff Page’s Jazz series at the Gods for 2006.
Posted by Eric Pozza at 6:29 pm

Olá, Australia. Do You can post the trio video? Visite-nos http://www.jazzseen.blogspot.com./.
We write about jazz.

Ni Hao! (From Shanghai) Sounds great! My favorite line up. The piano trio. So happy to hear there are still opportunities for students to perform concert type gigs outside of the CSM.
Scott.
PS
Hannah so happy to see and hear you're playing so well. Go for it!!