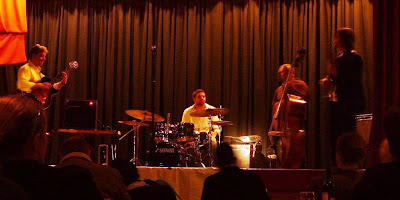 A teacher-pupil reunion was celebrated last night at the White Eagle Jazz Series. Carl Dewhurst was a student of Mike Price at the CSM Jazz School a good time back. Carl is now a major player on the Sydney jazz scene, and Mike is now the Head of the Jazz School. Accompanying Carl and Mike were two other alumni of the CSM – Brendan Clarke (bass) and James Hauptmann (drums).

This mostly was a night of standards played by a small combo, but with a few interludes featuring the two guitarists playing without the rhythm section. I particularly liked these more introverted pieces. They provided a real interplay by the guitarists, and I thought it let them express their styles more individually. Lots of the tunes for the night were well known: I hear a rhapsody, Have you met Miss Jones, Footprints, C-Jam Blues/Bag’s groove. There were also lesser known tunes, by George Benson (Thunderwall?) and John Scofield (The Beatles?). Darn that dream was done as a guitar-only piece and it was beautiful.

Carl played a strong, modern style. Electric guitar, lots of difficult substitutions resolving after lengthy (occasionally humourous) flights of fancy. The band lifted with his solos. He’s a hot and powerful player, and well received by the large numbers of students in attendance. Mike’s of another generation. Not less capable, but cooler and sweeter. He’d also break away from defined harmonies often enough, but not with the contest to the underlying harmonies that Carl would offer. Mike plays a semi-acoustic, and his style fits: fast, sweet and more diatonic. It was an interesting contrast.

I first thought Brendan Clarke (bass) provided a strong and conventional basis to the chordal movements, but during the night, his solos increasingly broke away from the stated harmonies. He plays with great chops; his fingers running accurately all over the neck. James Hauptmann (drums) kept a watchful eye on all the proceedings, provided a strong swing accompaniment, and broke into several strong solos.
Posted by Eric Pozza at 1:28 pm