The Jazz School welcomed Bob Mintzer, famed New York sax player and arranger/composer for a public concert last week. Bob had just spent 2 days getting from New York to Canberra, and came to the concert after a day with the students. He was looking forward to getting some sleep, but even in this state, we got a show of expert musicianship. 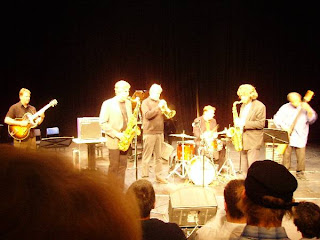 The first set was a small combo with staff of the school. Eric Ajaye (bass), Mike Price (guitar) and Mark Sutton (drums) played the whole set; Miroslav Bukovsky (flugelhorn) and John Mackey (tenor sax) sat in for the last tune. They played 6 tunes - I recognised two (Body & soul, Tenor madness). Someone said there was another standard that I obviously didn’t recognise, and I guess the others were BM originals. Bob was a master on his bright gold (gold-plated?) tenor. He interpreted and embellished melodies with subtlety and skill. He interspersed flowing solos with fast and fluid flourishes. He blew considerable harmonic alterations but with it all seeming totally appropriate and unforced. I especially loved his open tempo intro and ending for Body & soul – just like the on recordings, really. Great, modern playing. The band started pretty quietly and laid back, but built up during the set. Eric played solidly as always, but worked up to some powerful and inventive solos towards the end. Mike played complex chordal work and fluid solos. Mark was apt and obviously concentrating for this outing. Miroslav, always tasteful, played a lovely flugelhorn solo. And it was both interesting and instructive to see the contrast of John Mackay’s Coltranesque style against the more discreet inventions of Bob Mintzer.

But it was the second set that I especially loved. This was the student Big Band playing charts by Bob and led by him. I believe the band has been practicing the charts for a few weeks, and John Mackay commented that they were hard charts. They made them seem easy. The band excelled, with excellent pitch and tempo, and some impressive solos. They played 6 BM charts: Papa lips, Bright lights, Original people, Tribute, Each day and Latin dances. I was interested in watching BM lead the band – I don’t know what the fist symbolised, although the finger counts were obvious. BM did several solos himself, and it was fun to watch the 3 tenors just by him gazing in respect. Michael Azzopardi (piano) excelled himself with his solo on Bright lights. BM responded after with “that was good” – it was impressive when he said it on the night. Carl Morgan (guitar) got in two interesting solos, and Luke Sweeting (piano) did a lovely understated one. There was an alto sax solo which I found hard to hear (more on sound later!); Ed Rodrigues (drums) got a nice one in too. I loved Phil Jenkins’ (acoustic bass) playing – steady and perfect for the role, and he looks the part perfectly! I’ve left out lots of good playing here – either players I didn’t recognise or whatever. They all played really well – it was a very professional presentation. There was one spot that I really loved, I think is was at the end of Original people (?) The trombones and trumpets played a staccato passage, perhaps in fourths, where they bounced off each other, somewhat reminiscent to me of Carla Bley’s orchestration. Lovely stuff. In summary, a great performance – sharp, well intoned, and lively. Congrats to the band. 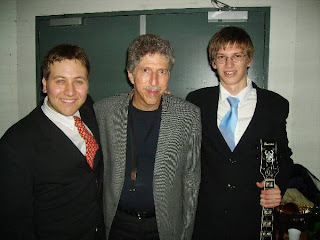 I was interested to hear Bob talk of his history. He’d played with Thad Jones, and said he was his major influence. Then he talked of Thad Jones updating what Ellington had been doing. Interesting. Today I looked on allmusic.com, and Thad Jones was described as “harmonically advanced trumpeter/cornetist with a distinctive sound and a talented arranger/composer”. It all rang true to what I heard in Bob M.

The sound was nothing to write home about. Mics were often turned off when needed, balance was poor and I lost a few solos. At one stage, BM even said “Sound, finally”. Not a good look for a small town showing off to the big smoke.

But what else went well? Nice to see John Mackay welcoming their classical colleagues to the concert, and also to see they were there. Nice to see a full house, although the venue was small, so that was not too difficult to achieve. Nice to hear Bob M’s chatter and name dropping – easy when the names are of the ilk of Brecker, Sanborn and Erskine. And, at least for Bob, nice when he finally got the chance to pack up and go home to bed.