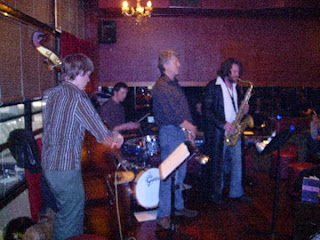 Hippos hosted John Mackey’s band last night, and it was another demonstration of talent from the CSM Jazz School. The band comprised John Mackey (tenor sax) as leader, Miroslav Bukovsky (trumpet), Michael Azzopardi (piano), Gareth Hill (bass) and Sam Young (drums). John and Miroslav are teachers at the school, and come with considerable reputations. Michael, Gareth and Sam are students, but highly capable.

John is a strong and emotive player in the Coltrane, early-60s, avant-garde mode. He will reliably blow complex and impassioned solos with a hard tonal edge, and lots of out playing; often long and demanding; often frantic or wailing, but always intense. He didn’t disappoint this time, and the tunes were suited to his style. They played several originals, and some covers, by Nat Adderley and others.

I have written before of Miroslav as a local Miles, in the sense that he gathers great musos to work together. In this case, he played the trumpet part in a 50s/60s-style small combo. He played melodies in harmony or unison with John’s tenor, and blew strong and well formed solos. He displayed more of a soloist bent in this formation than in Wunderlust or his own combos, and it was very impressive playing: few fluffed notes (common enough with the best of trumpeters), some harmonic backdrops, good internal structure and development in solos, occasional flourishes and fast runs.

Michael Azzopardi is everywhere these days, but he’s a great player and well worth the frequent listens. He played wonderfully as always, providing excellent backing with ever-changing rhythms and harmonies. He led a rich and changing rhythm section, often breaking into cross rhythms, or whole-note triplets, or similarly challenging the underlying rhythm. But he also provided numerous impassioned solos. I remember one especially when he followed one of John’s long solos. He told me after that he decided against trying to match this flurry of outside notes, so he played a lovely, rippling surface of steady, arpeggiated notes, which then developed into a softer and more thoughtful solo. It was a brilliant change of tack from the band, displaying a considerable competence in producing different styles on demand.

Gareth struck me from the start with a fast post-bop walk, and he held that throughout the night. He has a soft but present sound, and provided a steady, reliable undercurrent. He did several nice solos, too. Not flashy, but well conceived, tasteful and capable explorations of the harmonies. I especially liked some chordal double-stop work with accompanying drums and piano in the second set.

Sam kept the steady beat through the night, responded well to Michael’s explorations to the rhythm, and provided interesting changes and fills to underlie the heads and solos.

I only stayed for the first and second sets. To me, the second set was the more satisfying. It felt more settled, less frantic, generally more “musical”. But what I saw was a pleasure. Much more challenging than relaxing, but that’s how I like it.

This was classic 50s/60s avant-garde: John in his trademark long, leather overcoat, Miroslav cool beside him, Michael hunched over his keyboard; Gareth and Sam thrusting away underneath it all. Another great night of local jazz.
Posted by Eric Pozza at 6:46 pm