More from the Air Raid at Moruya Jazz Festival. 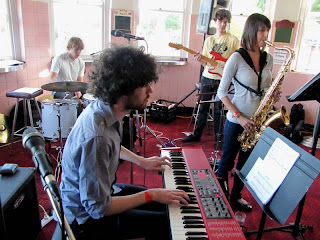 Fourth Degree Byrnes is Neveen Byrne’s platform for original tunes. She plays with several of the mature players from the school. I only caught one short tune from the band this day. It was their last piece: a moody original with keyboard and guitar solos and gave and weighty melody overlaid by Neveen on tenor. Intense and interesting stuff; I wish I’d heard more. Neveen Byrnes (tenor) played with Andy Campbell (guitar), Andy Butler (piano) and Hugh Deacon (drums). 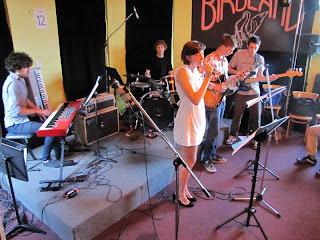 I also just caught a snippet of Matilda Abraham’s Quintet (festivals are for socialising, too). It’s an impressive group of players, although a few seemed less prominent this year. This outing was pretty much heads down in concentration, although was leavened by Matilda’s singing and some of her original songs. Matilda Abraham (vocals) led a quintet with Andy Butler (piano), Carl Morgan (guitar), Chris Pound (bass) and Aidan Lowe (drums). 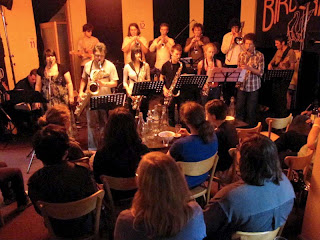 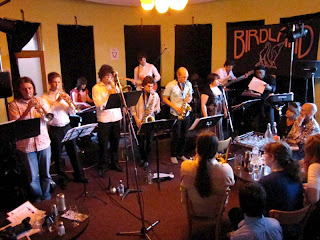 Chris and Aidan reappeared with the Recording Ensemble. I really enjoyed this performance. It was lively, engaged with the audience and the band was obviously having a great time. The Recording Ensemble plays original music and arrangements by its members like Reuben Lewis’s arrangement of a Zappa tune and Nick Combe’s Shhh…. I was particularly taken by Luke Sweeting’s composition Sound canvas. I’d listened to the modern remake of Gill Evans, Re-Birth of the Cool, on the drive down to Moruya, and I felt it was reminiscent of the charts, with voice leading and harmonies and melodic organisation harking to that era. The ANU Big Band was also at Moruya and I missed them, but I didn’t miss the ANU Commercial Ensemble. Big, bright, brassy, funky, cocky. All those things, and danceable and lively too. The large ensembles are always highlights. 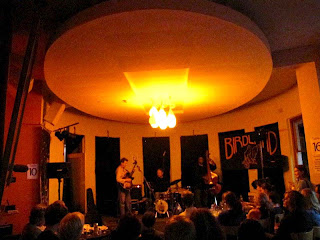 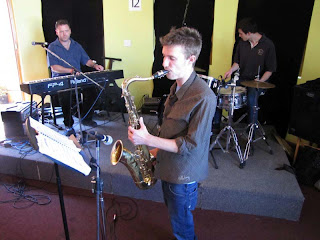 The ANU faculty was also represented. Two sets struck me as calm, controlled and from the mind. Mike Price (guitar) led his trio with Eric Ajaye (bass) and Col Hoorweg (drums). Mike plays some originals but also re-envisioned standards, with admirable and very cool interpretations. This is thoughtful and intellectual fare, not for the dancefloor, but for savouring some perceptive soloing. Matt Thompson (keyboards) led an organ trio in another controlled and minimalist performance. This was left hand organ lines, revisioned and leisurely bebop, slow but melodically challenging right hand lines. John Wilton (drums) accompanied, along with Max Williams (tenor) who matched with lines where every note felt individually selected.
Posted by Eric Pozza at 8:06 pm