There’s always a theme that you take from a festival. For me, Moruya 2009 was a farewell for some mates I’ve watched develop over recent years at the jazz school. Now senior and finishing students, they are off to Sydney and will be missed around town. I treat this report with some imprecision, because only some of those below are moving on, but the group plays together and can be discussed together. 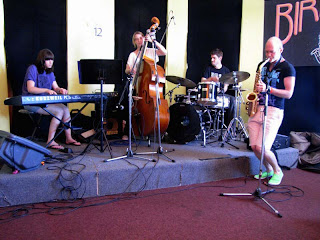 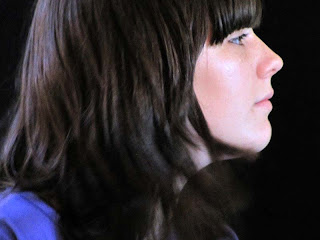 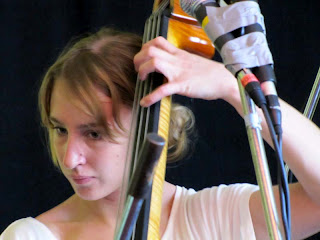 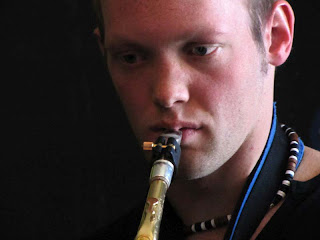 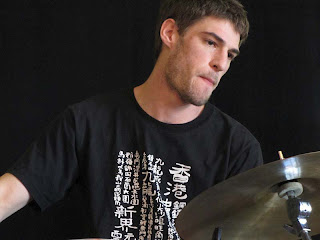 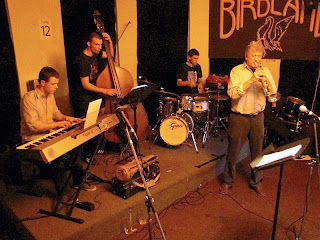 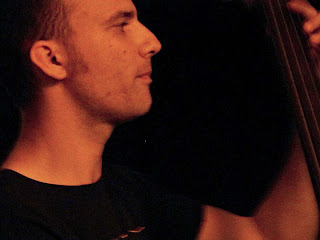 Bill Williams (bass), Ed Rodrigues (drums) and Hannah James (bass) are the three leaving for Sydney. We wish them well, and they certainly deserve it. The three of them all played impressively, even stunningly, over the weekend. Perhaps the best I’ve heard them, certainly amongst the most memorable.

H.E.L. is an acronym for Hannah, Ed, Lily. Hannah James (bass) with Ed Rodrigues (drums) and Olivia Henderson (piano) played a wonderfully busy and involving set early in the day. There was an original by Olivia, but also jazz standards: Oleo, Invitation, Fee-Fi-Fo-Fum and Horace Silver’s Nica’s dream. Jo Lloyd (alto) also sat in for some screaming, outlandish playing which always thrills. It was a great start for the day, and a challenge to the bands that were to follow (including mine!) I missed Hannah, Ed and Jo reprising some of these in unplanned set later in the day, but it was also well spoken of.

Luke Sweeting (piano) plays regularly with Bill and Ed, the three being Masters students at the Jazz School this year. Luke’s truly a harmonically rich and intelligent player. A pianist mate was commenting on his voice leading and counterpoint and harmonic alterations. Luke played an unusual duo set with Rachael Thoms (vocals) with a feature tune by Paul Grabowski recorded with Katie Noonan. Contemplatory and sedate, but with vocals flying into the stratosphere and complex interplay between the piano and voice. This tune was especially complex and a challenge but generally so was the rest of the set: unexpected and satisfying.

But the star event of the day for me must be Edmirobilluke. The name says it all: Ed Rodrigues (drums), Miroslav Bukovsky (trumpet), Bill Williams (bass) and Luke Sweeting (piano). The last set of the night is always the product of a busy day and a good warmup and some tiredness and is awaited with expectation. This was a stunner. The band was all playing at their most exhilarating level. Solos merging through melody, consonance and dissonance and complexity on call. All merged into a set that little distinguished heads or solos or ensemble playing. Original compositions that were heartfelt, unforced: powerful and stylish vehicles for open playing. Superb dynamics that just flowed between and through and amongst instruments so no-one took prominence yet everyone was essential. Gentle, busy, pushing, moving through feels and emotions with ease and inevitability. A stunning and worthy display of original improvised music. My last report on this band at the Gods did not do this gig justice. An excellent performance by Ed, Miro, Bill and Luke. 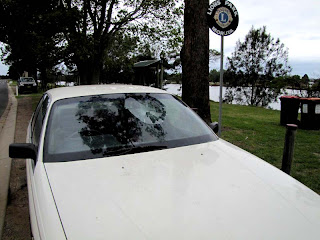 To finish off, I have just one little observation of jazz and its adherents. Someone mentioned to me in passing how pleasant are the jazz crew, and it’s true. There’s a confident, snappy air about them. Sometimes there’s a gruff exterior on the guys, but anyone who commits themselves to such a demanding and profound pursuit has to be an admirable type. So I thought as I was looking around the Air Raid on Saturday evening. But jazz isn’t always surrounded by such types and has a colourful history of associations. I’ve experienced several post-gig threats of violence: at Wagga JF, in London, recently in Prague and locally after Hippo. And this time, as I left Moruya, I caught sight of a smashed car windscreen that spoke of small-town anger and frustration. And then another on the drive back, somewhere outside Bungendore. I’ll stick to the jazz, thanks.

Best of luck to Bill, Ed and Hannah in Sydney.
Posted by Eric Pozza at 8:26 pm