Zoe Frater was in town again for a little gig at the intimate and intellectual venue, Beyond Q Bookstore. She’s a wonderfully nimble and buoyant bassist and her tunes lope along with pithy, rubbery vivacity. I could only stay for one set and the solos were limited, but again I enjoyed her suppleness and sense of melody. There’s a funky vibe to her playing that splits the beat and plays with the divisions and sometimes surprises and teases. Her tone, too, fits with its rounded, phat, sound that’s responsive to the fingers of her right hand, is full and present but not harsh or imposing, with just that edge of upper mid that keeps some definition in place. 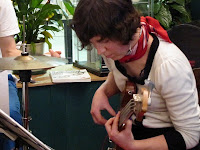 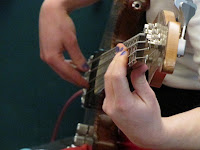 She was again playing with several mates from Canberra, John Milton and Andy Campbell, this time with the addition of brother Grey Milton. Grey added unworded vocal lines as a new slant to the sound that wasn’t in Zoe’s last local performance. Zoe promised some standards amongst the originals, but I didn’t hear any in the first set. She again played some Steve Swallow (Item no. 7 DIT), obviously a major influence. But most of the tunes were originals, by Zoe or the band, especially John. There were some odd times and unexpected structures. John’s Confessions of a cereal killer (pun intended) was introduced as a repeating four bar passage. But it was not obvious, with chords changing unexpectedly and the last bar extended to 6 beats. There was one simple two chord structure that took on a bouncy and lively aspect with Zoe’s playing, and development nicely by the whole band. Otherwise, the tunes were melodically complex and harmonically rich. Andy was the other significant soloist, and his lines were exploratory with a crisp, clipped, semi-acoustic tone. The band was obviously new to the music, but they performed well and adventurously at times to the small but committed audience.

Zoe’s not physically imposing on the stage, but aurally she’s funky and melodic and delightfully alive with her meaty tone and fine fingers. Catch her in Melbourne or on an occasional visit to Canberra. Zoe Frater (electric bass) played with Andy Campbell (guitar), Grey Milton (vocals) and John Milton (drums).
Posted by Eric Pozza at 10:41 pm