Sean Wayland got a great turnout at the Band Room for his gig last night and the audience got a great show, although it was a strange mix of entertainment and the unexpected with some fabulous playing. 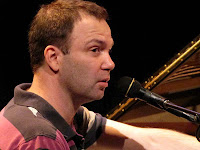 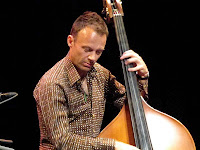 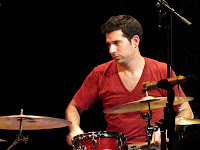 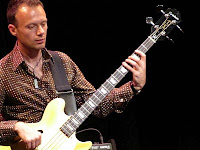 The night started with wunderkind guitarist James Muller going missing due to a car breakdown and a poor bus service. Sean rang him during the gig and we heard the chatter on speakerphone over the PA, to everyone’s amusement (except maybe James’). Then there was the singing. I liked it lots, with Sean singing within coo-ee of his highest pitch, with his own humourous lyrics and in a style that reminded me of Georgie Fame. (In one tune, he’d predicted the GFC, but he’s not the only one). Sean was concerned that singing wouldn’t go down at a University Jazz School, but it seemed pretty well received to me. He even performed a few musical comedy snippets between tunes: they raised a decent laugh and leavened the mix of much more intense and unforgiving jazz tunes. Because his tunes were intense, and played with a relentless energy that speaks of NY. Sean writes daily, but his tunes take more time to come to fruition. He spoke of one he’s only now starting to play after working on it for 6 months. The tunes impressed me more as chordal movements than melodies, with a natural but busy interpretation on piano. His playing told a story of the harmonic structure, endlessly working the chords, moving between chordal solos and fast, long one-note lines; steady and sustained rather than strongly dynamic. The busy-ness was supported by hometown New Yorker, Mark Giuliana, who was a feature star performer on the tour. Amongst others, he’s played with Meshell Ndegeocello, Avishai Cohen and Branford Marsalis, so we were expecting something special. He was fabulously involved and intense and busy: those words that speak commitment to me, and make me dream of the jazz meccas, and especially NY. A face deep in concentration and a performance on the edge: missing some figures and challenging himself to respond with ever more sharpness. This is improvisational creativity at the take-no-prisoners level, and exhilarating to hear. His long solo in the last tune was final confirmation of our opportunity to hear a top rung drummer in full flight. Memorable. But none of this is possible without the foundations, and Brett Hirst was admirable too, although perhaps less on the edge. A firm tone on double, and a nicely thumpy tone on his semi-acoustic electric bass for the funkier numbers. There was one that I could hardly count let alone sing the bass line of, but he held it with comfort.

So despite the absence of James Muller, we got a powerful and intense concert from our Sydneysider now New Yorker with his local and visiting offsiders. It wasn’t the easiest of concerts to listen to, but it was clearly worth the investment and effort. Sean Wayland (piano, vocals) led a trio with Brett Hirst (electric and acoustic basses) and Mark Giuliana (drums).
Posted by Eric Pozza at 10:59 pm