It’s time for my annual run to the Moruya Jazz Festival. I got to play and I heard the Canberra locals get together in various combinations, some I hadn’t heard, most I had. I’ve reported on them often enough, so just a few comments. Obviously my gig is vital for me, so I take the liberty to start with that! 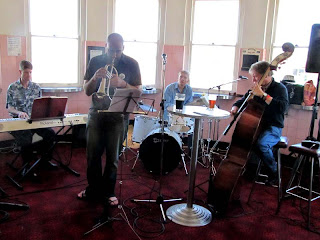 I got together a few mates for the festival, and we appeared at Deja Two. Deja Two was Cameron Smith (flugelhorn), Peter Kirkup (piano), Mark Body (drums) and Eric Pozza (double bass). Just some standards, but: Cam reads easily and plays a stylish and correct solo with a lovely flugel tone; Peter knows his jazz history and music theory and is a pleasure to play and chat with; Mark is jazz school so well trained and possesses a broad swing (so says Peter); and I continue to struggle with my change to the big, acoustic bass, but I’m enjoying the challenge. We rushed a bit and were harmlessly messy on a few starts and finishes (it’s just a blow, after all) but indulged in some extended solos, got some decent band dynamics happening and pleasingly held the audience. So we enjoyed the outing.

The Air Raid Tavern added a second stage in the Bar this year. It’s been the modern end of the festival and the home of the ANU Jazz School for years and remains so. I was only down for Saturday and didn’t manage to move beyond these two stages. 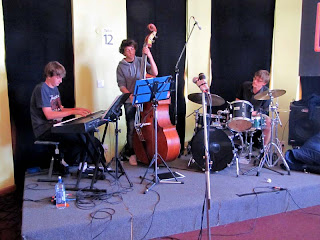 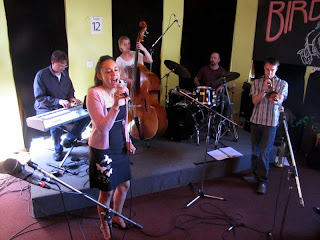 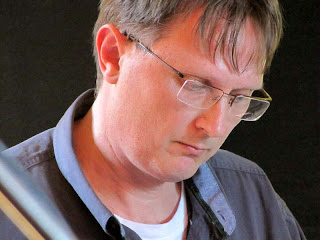 Angela Lount and the Fedoras played the soft pop/jazz (read working) end of the jazz spectrum with supple smoothness and some interesting playing. They are classy and you can see why they get the corporate gigs. Angela Lount (vocals) sings with the Fedoras: Paul dal Broi (piano), Dan McLean (trumpet), Hannah James (bass, sitting in for James Luke) and Chris Thwaite (drums). I noted a classy solo from Paul and a wonderful growling plunger mute solo from Dan. 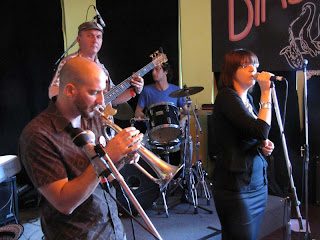 I just caught a few bars of my mates Kooky Fandango. They play a bluesy-jazz style, without a chordal instrument (other than Peter when he plays chords on his crystalline 6-string Alembic bass). It was a fore-shortened KF with only 4 players on the day, but they are entertaining and well rehearsed and it shows. Courtney Stark (vocals) fronted Cameron Smith (trumpet, flugelhorn), Peter Barta (bass) and Robert Nesci (drums). 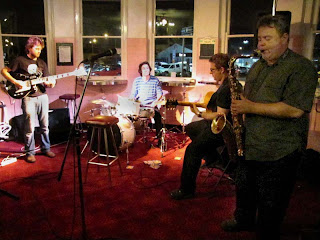 As Famous as the Moon is an institution around Canberra. Dirk Zeylmans (sax) leads a very smooth, stylish band with Graham Monger (guitar), Lachlan Coventry (bass) and John Milton (drums). Dirk is a renowned local sax technician, so you can expect wonderful tone along with his pleasant and very direct and personal patter. This is cool jazz in the ilk of Stan Getz. Graham played some lovely blues-scale infested lines which fitted like the glove; Lachlan is a well-trained guitarist who plays a supple electric-bass style; John Milton played understated but steady and observant drums.
Posted by Eric Pozza at 9:00 pm