Presence of the past 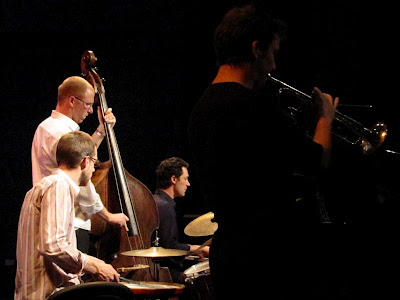 Tom Vincent played the Band Room last night, the night following Sean Wayland. Within minutes of the Tom’s start, I realised how much I’d enjoyed them both, but also how the gigs were hugely different. It was a fascinating juxtaposition. To me, Tom speaks from the history of jazz. One of my mates heard the 1950s, and there were clear references to the era before cool, with a sensibility that said bop but a control and earthiness that was post-bop, but there was also solid and comfy swinging bass and a drum style that spoke of an earlier era still. Jazz history is rich and full, but the modern world can have a short memory. I remember being struck by the strength of this past when I heard Michael McQuaid’s Red Hot Rhythm Makers playing 1920s dance hall music at the Wagga festival a few years back. I still don’t go out of my way for early jazz, but I can enjoy it when it’s well played and it’s not just nostalgia. Tom’s band plays history with an awareness of modernity, thus doing our history justice. 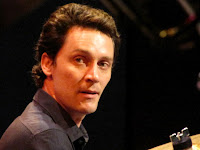 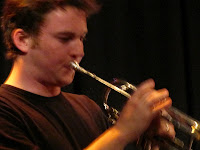 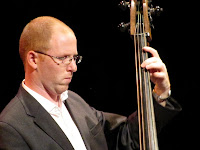 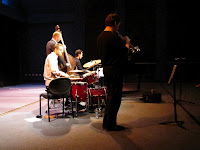 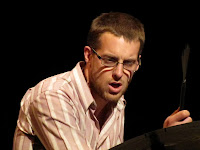 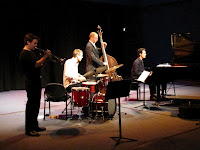 Tom leads the band with considerable fluidity. Last time I heard him, he played unending improvised medleys that challenged his offsiders to stay with him. This time he played a repertoire. But he moved rhythms and tempos radically at times, taking the band in sometimes unexpected directions. And he led with calls or imploring gazes or solo piano introductions to set the scene. His playing can be whimsical and obtuse and there’s plenty of dissonance, and these are modern sensibilities. So although it speaks to the past, this music is not a museum piece; rather, it touches an earlier era with respect and intelligence and a modern consciousness. Eamon McNelis on trumpet was a wonderful foil to Tom’s piano and I enjoyed his playing immensely. He was formal, with nary a note or arpeggio or scale out of place, for harmony or pitch or tone. I expected he was classically trained, but he corrected me. He’d had 2 years of classical training, but it was other influences that formed him: he mentioned Eugene Ball and Wynton Marsalis. His tone was pure and classical: accurately formed and pitched and bell-like in texture. Here was the calm and measured formality to respond to Tom’s elusive and elastic lines. Ex-Canberran Leigh Barker provided the bass line, and it was fully acoustic, meaning unamplified. Tom noted this, and said it changes the presence of the whole band. Certainly playing double bass without amplification is rare. It must limit the volume of the band, although I didn’t notice it was particularly quiet. Leigh gets impressive volume, perfectly adequate to match drums and trumpet and the Yamaha grand. And it was a rounded, soft bass that lent support with well chosen lines. Hugh Harvey on drums was the stylist that most said pre-bop to me, with soft kicks highlighting infrequent accents, and shuffles and brushes and steady snares. It fitted nicely and avoided prominence.

I think they played a few originals: some unexpectedly short, just a melody and that’s it. But mostly it was the standards repertoire: Willow weep, Cottontail, Cherokee, Straight no chaser, Foggy day, Ellington, Monk and the like. They played Coltrane’s Resolution in an interpretation which was challenging by being out of era. But I felt their strength was these earlier materials that they played with an understanding and vitality and approachability that brought them to life and was free of nostalgia. It was an uncommon pleasure. Tom Vincent (piano) led a quartet with Eamon McNelis (trumpet), Leigh Barker (acoustic bass) and Hugh Harvey (drums).

PS, After writing this, I listened to Tom Vincent’s Blood red CD, and I find it’s different again from this performance. It’s a trio set recorded live for the ABC, with mostly short, original tunes, and a very modern piano trio sound. From the first tune with the fourths of McCoy Tyner, it was unexpected. Tom is certainly an interesting and varied player.
Posted by Eric Pozza at 9:27 pm