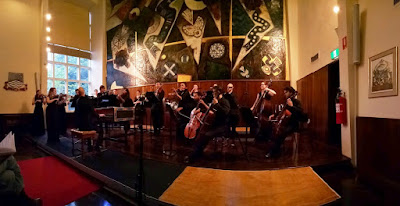 There are answers here, but to totally different questions. We went to hear the latest concert of our mates, the Australian Haydn Ensemble, and it was fabulous. This was a larger ensemble for the night - they do a bigger ensemble every now and then. We've followed AHE since early days and they are seriously getting in their stride now, having released their wonderful first album on ABC records, and with a following and a history, they are developing a sense of presence and real purpose and, from the frequent open smiles, a great pleasure in the whole outing. AHE brings players from around Australia, but also from OS, not least some expat Aussies from London. This program featured a lineup of 21 in various combinations, guest directed by Eric Helyard with leader Skye McIntosh and solo flautist Melissa Farrow. The music was three of CPE Bach - Sinfonia E min Wq.178, Flute concerto D minor Wq.22 and Harpsichord concerto F minor Wq.43/1 - and one of namesake Haydn - Symphony no.49 F minor "La Passione". The whole was played with great dynamics and a fabulous sense to time and togetherness - I was in awe. We were lucky to be up front. Melissa's flute was clearly articulated and massively quick. I was stunned by the fast scalar lines with tack sharp tonguing. Fabulous. Then Erin with his harpsichord concerto part, again fast as, sweeping through phrasings that spelt harmonies that moved at will. Fabulous in playing and in the intellectual feat of the composition. Then Haydn. I'd played this (NCO 20 Aug 2016) so knew it intimately and that's both exciting and engrossing. The score doesn't look too scary, but this baroque era is unrelenting with occasional tripwire rhythms and sudden double-time phrases, so it can be tricky. And what pleasure to hear such experts laying into a tune you know: the easy bowing, nimble fingerings, comfortable reading, all on gut with baroque bows. And of course, the horns and bassoons and flutes and the rest, appearing inexorably but subtly amongst the strings, of the passages passed to seconds or violas, or Skye's lovely, purposeful solo-as-leader melodies. Suffice to say I enjoyed this immensely and it had us driving home, thinking of London, where so many concerts must be like this. A huge pleasure.