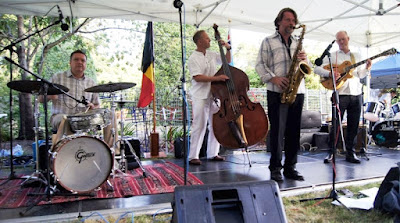 These are people I've heard a million times (or thereabouts) but even still it can be magical. Ambassador and bassist Jean-Luc had gathered John Mackey, Greg Stott and Mark Sutton to feature at a charity gig for Fijian schools. It was held in a relatively bush-like area of the Belgian Embassy gardens. ArtSound provided sound. Attendees were not huge but close and appreciative. Thanks also to donations from a few supporters and refreshments from Stella Artois and Tasmanian Ninth Island winery. I was in front of John, seemingly hearing every nuance from the bell of his tenor and following his uber-developed sense of melody. All the factors were there: time, form, harmony, substitution, extensions. It's in the book of jazz improv but it's a special pleasure to hear it unfolding in real time in real life. There's emotion of course, but not without immense intellect. On that score, I was disappointed to read the recent report on the ANU School of Music fiasco where I found jazz lumped somewhere with rock/pop as a lesser art relative to classical. Jazz is nowhere near a lesser art given its demands for theory and technical and emotional skills to improvise in real time while responding to others. But back to the pleasure of hearing this sophistication at close quarters. The clear sound from playing in the open helped. The notes that started or featured in a phrase, the lightly flashed fills, the sixteenth note run that fell endlessly, the scales of various colours, perhaps interrupted by quizzically repeated notes. All immensely satisfying in its exploration and interplay. And a solid band behind. John mentioned later how he often prefers his companions to hold when he goes out. Greg, Jean-Luc and Mark could do that. Mark might be more playful at times, kicking or snapping an accent or two. J-L played his walks and latins with consistency and skills that surprised me, given this is now a hobby for an otherwise busy ambassador and father. But his training shows. And Greg, playing a George Benson model semi-acoustic, simple, crisp toned and unaffected melody with lovely chordal fills and accompaniment. Understated but so pretty and so correct. They played a few of the most obvious standards - Cantaloupe, Softly, All the things, Blue bossa, Stella and the like - but these were anything but ordinary in their hands. Just a grand pleasure of the highest sophistication. Then the Telopea Jazz Band. This is a school band, but I chuckled when someone said "they don't make school bands like they used to". I think that was after Weather Report's Birdland. Birdland? This is demanding music and they pulled it off well. Some Motown, some jazz charts. Lots of kids playing surprisingly well. Again, Birdland, school band? Wow. 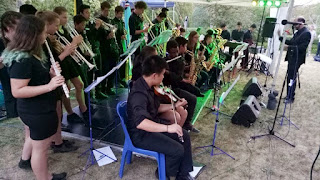