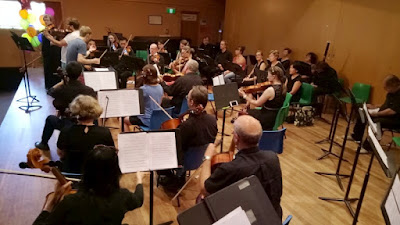 It's funny to think that I cut my middle finger, left hand, cutting a tomato for lunch, and I got through the NCO concerto concert with a bandage. It wasn't so bad (not bad at all) but it's a fear of musicians. I've heard tell of musicians' hands insured for millions; apocryphal, perhaps, and worthy of some amusement. This was the National Capital Orchestra's Concerto Concert. It's an annual end-of-year event where members take the limelight to play movements of concertos or perhaps take the stand as conductor. This time, the concertos were an interesting bunch: for two violas (Prot), for four horns (Schumann) and one more common, for flute (Mozart). Also a few songs from G&S and Verdi and a devilishly difficult piece, Liszt Les preludes, and a famous unfinished symphony (Schubert). It was a varied mixtape of music with plenty of challenges. That's how I like it. As expected, we cut the Liszt better than ever before ("she'll be right on the night") but still not perfectly. That must be a common refrain. The Mozart and Prot sat with nice classical order, so much so that we played the Mozart without conductor, in chamber style. Kaitlin was lovely in the arias and hit plenty of high notes. The four horns fascinated me with their volume and smooth interactions. Interesting to see the ear plugs out in the front rows that took the full force of the horns. (I wished for earplugs for the percussion to finish Liszt: it was ecstatically loud and close behind me). Then to end, Schubert's Unfinished symphony, simple lines but quite compelling. To end my first year with the NCO. I feel blessed. These guys can really cut it.