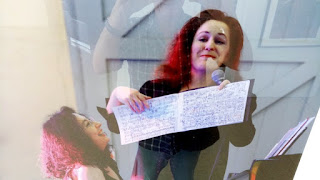 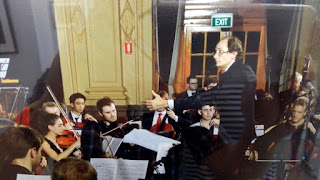 When I've attended concerts in Canberra over the years, there's usually been a photographer. For jazz, it was Brian Stewart and I was lucky enough to launch his exhibition at early this year at Smith's. I wrote about it on CJ as a golden era. For classics, it was Peter Hislop and I've just attended his exhibition in the decidedly upmarket location of the High Court Foyer, now a popular classical music venue. Funnily, as I entered a guitar duo, Duo Amythis, was playing the final bars of a yet another concert. I hadn't known. Then Peters pics. Unlike Brian's, these are colour; like Brians's, they are digital. I loved the behind-the-scenes pics, especially when I knew the subjects and occasionally when I remembered the gig. Also the arrays of performers (choirs or orchestras) in black or common colours that is so attractive in this scene: it's great fun to find familiar faces. Peter's earliest pics go back to the first ACO gig in Sydney in 1976, so he's got serious history. These pics were mainly around Canberra, at Llewellyn or CIMF or NGA or the High Court itself, of local or visiting stars like Peter Sculthorpe, Roland Peelman, Chris Latham, AYO. I was amused to see jazz got a shoe in with John Mackey and Miro Bukovsky's shadow. The photos were too few, but interesting. I enjoyed his eye, it's good and eminently professional. The digital colour was just a little edgy in a big print, but it's an unavoidable vestige of the technology. It's good to see performers for the ordinary people they so often are. My mechanic surprised me the other day saying he'd played violin in an orchestra in his school days and had completed several years of AMEB. He went on to talk of the good, even raunchy, times of the students off at camp, and that the fine music types are not much different from the rock stars. There's a window on some of that ordinary humanity here. Nice. Excuse the pics; it was impossible to quote through glass in a bright High Court foyer.

Peter Hislop displayed a small selection of a very large collection of photos of music making in Canberra.

PS, I dropped into the National Gallery to waste a few minutes and found a new fave: Ethel Spowers. Here are some pics.
Posted by Eric Pozza at 3:47 pm

I too saw the Peter Hislop exhibition, People, performances and places at the High Court. I don't think anyone else in Australia has documented these types of performances and performers the way Hislop has, and what an eye he has for capturing musicians doing what they do. I've not seen another photographer dedicate his time and experience this way, especially as he does not charge or get paid to do it.

It's a fantastic legacy he has created for us all to share.

Thanks Eric, glad you liked the exhibition. What the public (and most photographers) see is really the tip of a huge iceberg that supports each performance. I'm lucky to be able to capture it for the performers, the public and the future.