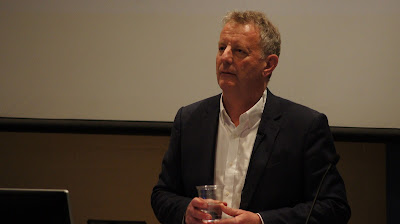 Jeremy Leggett gave the Solar Oration 2016 at the ANU. I've not felt a lot of hope around climate change for a while, what with our politics and Trump and the rest, but I do read there is some: we perhaps have a year or four to turn things around; Paris succeeded and change is "irreversible"; business is coming around and technology is changing rapidly. A few stubborn outbursts still arise, and one was raised in questions: apparently Matt Canavan (LNP, Senator, Qld, Minister for Resources) had that very day extolled coal in the Senate. But even some of those who recognise the science, have some hope. (Only some ... quite a few don't). But I understand, if you give up you have definitely lost, so hope is needed. JL provided some hope in this talk. He spoke of his background, then of the global perspective, under three themes: global society awakening to the threat of climate change; insurgencies disrupting energy incumbencies fast; incumbencies facing multiple threats. His personal story was early years in oil research and exploration (not all geologists and oil-people are denialists), then environmental campaigning with Greenpeace in the 1990's, then social entrepreneurship with Solar Century and a few books amongst this (his latest was the basis of this talk and is available for free download from his site). He further split his talk into ~13 topics, around governments getting serious, public action, regulator activities, divestment and capital, legal actions, prices, batteries and electrical vehicles, efficiencies, role of data, development, utility death spiral ("coal in terminal decline"), oil/gas/nuclear debts, shale boom busted. There were some nice facts: the average age of oil industry staff is 49 (so soon for retirement); solar PV, battery and electric vehicle should have payback of 7.6 years in 2020 without subsidies (ROI 7.3%); little money is yet made in Green tech; Bloomberg: solar/wind to win cost war by 2020; solar lighting (now costing $5) replaces kero in Africa with $70pa saving; the climate wars are an "epic drama"; 4 US cities are already on 100% renewable power; legal actions against VW, Netherlands legislation and Exon-Mobil; solar has been bid at $24/MWh; some buses in Geneva can flash recharge in 15 sec (did I get that right?); carbon industry debts are rising and unsustainable. Not sure I caught all those correctly, so read the book. But regardless of the positives, "we are in a race against time ... desperate" and at least Paris has "given future generations a fighting chance" (Obama to US Delegation to Paris COP; not sure of precise quote). There were questions. Canavan got that mention above; militaries are not included under Paris, but none-the-less US military is active on reducing carbon; biological fuels; capture of carbon already in the atmosphere ("there's hope but..."); marine and aviation; behaviour change ("we won't shop our way out of these problems"); deniers respond to evidence by going to the bunker; leakage from coal seam gas mining; transition ("none of this happens overnight"; need for a "structured retreat"). And threats (was it HSBC who predicted a possible Oil crash 2013?), but predictions are only perfect in retrospective. In the meantime, there's a G20 Financial Stability Board Task Force on Climate-related Financial Disclosures due end-Dec 2016: keep a watch for this! Lots of ideas and news and some hope, I guess.