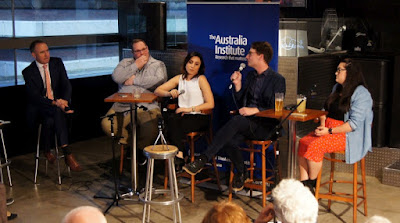 This was the end of year wrap-up at Politics in the Pub, chaired by Australia Institute director Ben Oquist with journalists Rob Harris (Herald Sun), Daniela Ritorto (SBS News), Matthew Knott (Fairfax) and Alice Workman (Buzzfeed) and I was disappointed. I guess I have to recognise these are all press-pack journos form Parliament House, so that's what busies them and pays their keep and I doubt there's much time for anything else, and they were called to speak for the 2016 Political Wrap. But despite the concerns about 24-hour news cycle and expectations of continual breaks and the sheer speed of Australian politics, this was all "Beltway' stuff. Probably it is all "Beltway" stuff because of that - the journos are just too busy to have time to think.

I was interested that they remembered Turnbull's press conference clashing with Usain Bolt and Turnbull speaking at some club or other when the Brexit result was announced and Turnbull's delayed and caustic speech after the election and Shorten's treating it all like a win and the year as the "rise of the deplorables" and that photo of George Christensen. All jokey, and I guess you need this to survive the blistering pace in this bickering place. And it was interesting to hear of threats to Turnbull and likelihood of another PM being rolled and incumbency as the new burden, of Pauline Hansen as the big winner of the year, that she runs a "slick operation" after 20 years in politics and that she avoids the press and publishes videos direct to followers on FB. There were questions about post-truth and what to do about it (MK admitted he'd been fooled by one for a while - so was I): media has a role, but the public must be "skeptical consumers". About the saving Medicare stoush and opinion vs facts; di Natale representing his supporters who allow no deals with government; economic insecurity not being enough to explain Trump, culture is also important; that disdain for politics has always been around, but it's highlighted now, partly by the double dissolution election (One Nation would only have won one quota in a normal election); about incumbency and consistency and policies (ACT cited here, but demographics is also an issue); about sneering at bogans and need for conversation; about SkyNews as an internal broadcast between politicians (interesting). But not a mention that I remember of the end-game issue of climate change, and nothing substantial outside Australia and nothing at all outside US/UK. So we remained in that puddle of inbred concerns and battling that we all rail against. I wanted to ask "how long can they keep blaming Labor" but my question, too, would have been in the local swamp (excuse the borrowing). As the Arctic melts and our kids' future with it, along with 1% and education and poverty and the rest. Things are mighty wrong and Trump/Brexit are not the answer but sadly no answers here. We all just keep getting consumed.