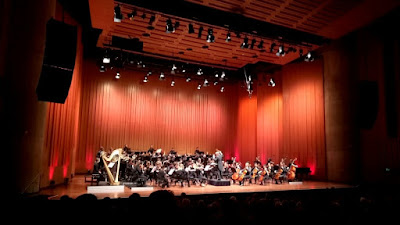 I find it intriguing that, as I play more, I hear more. In this case, it's classical, orchestral music and what I hear is the details, the difficulties of a piece, the approaches and capabilities of the players. It's to be expected. The pieces I have played are even more understood, so more clearly observed. Last night was the CYO, the Canberra Youth Orchestra, in two formations. Firstly, as a string orchestra playing Philip Glass with Gabi Sultana. Secondly, as a symphony orchestra in large array playing Mahler symphony no.1. I don't know either piece in particular, but I'm mightily impressed by the commitment. These are both major works. PG's Tirol concerto is a later work displaying his regularity, twists and turns, minimalism in common parlance, but I thought with more investigation and variation, and although it displayed some trade mark rhythmic patterns and harmonies, there seemed also to be dissonant harmonies and different approaches to rhythm that I wouldn't so obviously have picked. So this was interesting.

I was surprised when it all started with Gabi Sultana playing a solo piano introduction; I enjoyed the PG regularity and fluctuations and mutations; I savoured the bass ostinatos in the last movement. Nicely played by the orchestra with considerable affinity and counting. I wondered if it could have used more dynamics, but maybe that's PG again. And I was surprised by the warm reception of this PG piece: minimalism is not always so warmly welcomed, so this also was instructive. But I shouldn't have worried about dynamics. The next piece was Mahler and it was big and long and softly varied and playful with fanfares and popular song and the CYO's dynamics were great: well interpreted, unforgiving, apt. This is 55 minutes in four movements. It twists and plays and insinuates its melodies, starting with the slightest of sustained sounds with various injected features from muted brass or horn (lots of) or other, but welling, and by the end of the first movement, blaring, and leaving me wondering just how we'd gotten there. Then a louder scherzo and into a delicate waltz. Again, how did that happen? Then a solo muted bass playing Frere Jacques (thanks Hayley) that moves through the orchestra with various other folk melodies and a outspoken final movement. Hayley's notes talk of a return to D major marking a heroic victory. It was certainly a heroic and successful outing by the CYO. Easy and intense dynamics, capable ensemble playing, decent intonation and impressive technique, a very able take on a very substantial work. Lots of horns (8?), lots of brass, lots of players: it's certainly a massed work. I read 72 names in the program and assume all played for this piece. I note a few (more mature) CYO alumni were invited back to expand the masses, I guess to make up the extra forces needed for a Mahler. So, a massively successful concert that will presumably form an indelible memory for these players. Congratulations to Lennie and his arrayed mates.

PS. I missed mention of Gabi's encore rendition of George Crumb Cadencza Apocalittica (Tora! Tora! Tora! Makrokosmos II). My apoliges to Christian. This was a work of intense action. Christian tells me it recounts the Japanese raid on Pearl Harbour: high tinkering chords, then a heavy full handed dropping gliss over the full keyboard and rumbling low notes, then final slaps on lows strings under the lid. Then again, sometimes some chords. Repeated, finally played against a call of Tora! Tora! Tora! Japanese, intense, threatening, ultimately deadly and unyielding. Apocaliptic. Such a difference from the other two pieces, so heavy and modern and a strong and committed performance by Gabi. A stunning piece of program music, and like all such, made immensely more interesting by knowing the narrative.
Posted by Eric Pozza at 10:54 am