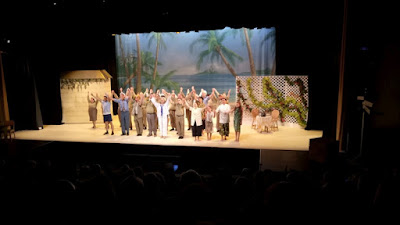 It's of a time but it tells truths. It's just a musical but an important one, one of the early ones that dealt with social issues, that had some complexity, not too B+W. It's nothing like our daily diet of political anger as it talks of race and mixed marriage and love and death and humour in the face of war. Not that there was so much war, at least then and there, in the South Pacific, in real life in Vanuatu looking out on Tanna, called here Bali Ha'I. The Americans are in the tropics; the central character nurse Nellie Forbush falls through love with local French plantation owner Emile de Beque; the local worldly-wise mother Bloody Mary pairs her daughter with Lieutenant Cable; Seaman Luther Billis is ever witty and on the take, the Navy's response to Bloody Mary.

Mostly it's a quiet military life, waiting for action, entertaining each other, mingling, but the war intervenes. One of the lovers is lost, one finally commits to love, Japan's navy leaves the neighbouring island. If you're of a certain age, you've at least seen the film, remember the shower scene, can sing a few tunes. The tunes are great and memorable - this is Rodgers and Hammerstein, so from a great era of American music: Some enchanted evening, Bali Ha'I, Younger than springtime, I'm in love with a wonderful guy, even jingles like Dites moi or set numbers like Nothing like a dame. Simple but memorable melodies, innocent words. On the outside, all innocence; on the inside, dealing with real issues with the deceptive innocence verging on wisdom with a dose of sentiment. Characters may wrong others, or misunderstand them, or find they are at cultural odds, but it's done in good faith through honest weaknesses and they discover themselves in the process. It's a big call for a Broadway musical, but the great era of American musicals and film and music was a great era for a reason. South Pacific was performed here at TheQ by the Queanbeyan Players, with generous amateur cast and orchestra. One friend raved of the quality of the music, the memorable tunes; he was comparing to modern musicals of recurring leitmotifs and few numbers: I agree. Another friend saw misogyny in Nothing like a dame and more and it is out of our time and conversation, but I saw difference and attraction rather than demeaning. I was taken by Cockeyed optimist, a lesser known number, that spoke of being hopeful in the midst of WW2 which resonated, for me, with Obama's hope in a time of climate, environment, terrorism and the rest. And by the wry irony of one song (can't remember which) that argued that kids need to be educated early to see difference and know their tribes. I richly enjoyed the medleys that are overtures in these musicals; I was blown out by one particularly twisted instrumental reprise; I was amused by a walking clarinet (?) feature against one song. Suffice to say, South Pacific was great, we enjoyed it immensely, the Queanbeyan Players did it justice with good singing and believable acting and some decent dance numbers. Very worth doing and very well done.