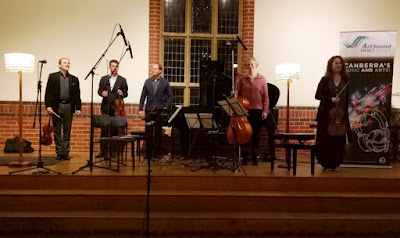 David Braid visited again from Canada, again at Canberra Grammar School. Last time he played solo and I heard a rich mix of classical and jazz, in solos, in compositions, so the lines weren't just be-bop runs spelling arpeggios and scales from chords, but richer, subtler, informed by jazz but crossing into classical. His latest visit has just taken that and expanded it. So here he was visiting with the Penderecki Quartet, a classical string quartet of inestimable quality, in residence at Wilfrid Laurier University in Waterloo, Ontario since 1991. There's long-term interchange in the quartet and it showed. I felt the some comfort with David, although his recording of these works is with another quartet, the Epoque Quartet. There's rich composition and orchestration here, plenty of unison lines and intriguing harmonies, but also improv. David's improv is closer to the be-bop vein and wonderfully full in rich and correct and with also satisfyingly complete lines, sequences that are untruncated although a sometimes just cleverly left hanging. The improv from the string players was not so obvious to my ears. Classical improv often tends to rhythmic and repetition, strong in its own way but not boppy. I easily caught a later violin improv, but wondered a few times if viola or cello solos were written musics. I presume they weren't. Written or improvised, they were firm, strong, together, expressive. This was a strong quartet. Together with David and his compositions, this was strong music. Just occasionally hinting at heads, sometimes developing grooves, from a piano left-hand or a cello pizz walk, but the chordal structures weren't 32-bar or similarly evident. This is jazz/classical crossover, just accentuated by the sound of classical strings, and gloriously satisfying. And the compositions were nothing light-weight. Joya variations lasted about 13 minutes and the variations were none too obvious, nothing baroque-like although there were spots where the piano sounded Bach-ish. Chauvet was dedicated to the paleolithic cave paintings, starting heavy piano chords with string glissandi and lasting around 20 minutes. There was one touch on standards jazz, I've never been in love before from Guys and Dolls. David had provided the jazz score for the recent film on Chet Baker, and had rearranged the standard for this format. Then a few other tunes, one a picturing of cohesive diversity on a Toronto subway. Overall, a fabulous crossover between classical and jazz from a unerringly committed group of musicians playing intriguing original compositions. I don't know where it sits in the spectrum of music (but neither does Canberra Jazz these days, nor much of the world of music) but this was a world-beating and deeply satisfying outing.