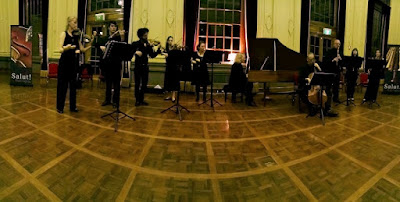 Salut! Baroque had me thinking of a few things at their concert last night at Albert Hall. Firstly, about the history of music. This is music played with informed authenticity in the period tradition, all harpsichords and recorders and baroque instruments. They must have been an early incarnation of this practice in Australia. S!B are in their 22nd year. But what gets me is the olde sound against the dates of the composers: several were extant in the 1600s and one in the 1500s, but a good few only died in 1770 or thereabouts. JS Bach died before this, but he's somewhere in this ballpark for music and Mozart's short life was around this time, but Beethoven was born in 1770 and he's worlds away. For this, I read that various conceptions of music existed contemporaneously and change can be quick. It may not have looked like that at the time. Thinking of today, there's something pretty similar, with all manner of musics being played and even written. So it is in all art, I guess. The other thing I notice is the bowing and the approach to bass, but that's about me and my learning. But this was such a lovely concert, changing through varied combinations of players and associated sounds. The strings sounding fairly modern, the harpsichord spelling the gentler sounds of that era, the recorders sounding earlier again, but they all took similar roles at various times, with melodies passing to baroque cello or the three recorders taking melody and counterpoint roles, perhaps balancing against the strings. There was just one piece with three recorders alone, otherwise several with strings and harpsichord and with various combinations of recorders. And one with harpsichord and a conversing pair of violins. I noticed one violinist with a jazz in his background (jazz in not totally forgotten here!). Rachael Beesley was leading on violin and she was a great pleasure, committed, expressive, leading. I enjoyed the informal presence of Monika Kornel on harpsichord who would twist from the stool to be able to follow Rachael's or others' leads. Such a great little concert, close and intimate, fairly quiet but expressive and even musically humourous in the last piece with the final movement Pour la caille (=For the chook). For the chook seems a strange name for a movement after the allegros and prestos and adagios of most of the other pieces, but the recorders' squawks or clucks fitted the title. A lovely and entertaining period concert that passed so easily. BTW, the theme was how we know about musical performance in this period - partly through the treatises by various of the composers, Quantz, Avison and others.

Hi Eric, I missed you at that concert. I loved it. Here's is my review. http://citynews.com.au/2017/review-theres-nothing-like-big-burst-baroque/