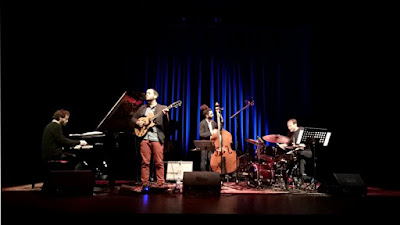 The day Smalls came to Canberra. At least that's the way it looked to me. Smalls is a NYC Greenwich Village jazz club with bands earlier and jams later. It's well known for its daily live video feed (search Small live). I've watched three of these players on the feed: Ari frequently; Or often; Nitai at least once. I don't think I've caught Yotam. But there they all were, on the stage at the Street Theatre, on their way to the Melb Int'l Jazz Fest and Sydney. There was a good turnout, too: not full but enthusiastic. I spoke to the women next to me after the gig. They didn't attend jazz but were animated by the lithe musicianship and attractive music. There were solos - all virtuosic, with an ecstatic commitment especially from Ari - and complex melodies, often piano/guitar unison, over comely latin and other rhythms. It was easy music to like, very attractive. There was good humour on stage, too. Or smiled frequently at Ari. Ari of the polyrhythms that I couldn't disassemble and the sharpest of snappy playing with the most delicate of stick control, and Or with his deeply syncopated accompaniment, spelling harmonies and segments and just occasionally mirroring guitar or other melody. It was mostly original, although there were a few latins, a milonga and a tune written for mandolin, and one piano/guitar duet on Polkadots and moonbeams. Just one set, 90 mins, as I like it. Short and sweet and wonderfully satisfying. NYC can come for a visit anytime, but in the meantime, it'll have to be Smalls online.