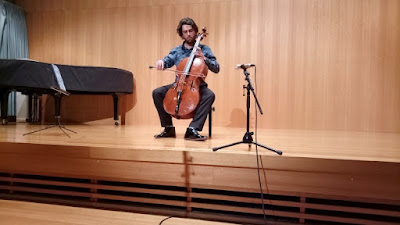 Two great concerts in two days; a pleasure. The second was Anthony Albrecht on his Bach to the Bush tour of ~20 locations throughout the Eastern states. It's an intimate thing, with a chat and even Q&As on offer, but that's not to diminish the music or its performance. Obviously there's Bach. Anthony played two Bach cello suites, no.1 Gmaj and no.2 Dmin, introducing them with discussions and quotes on the nature of each key. The Gmaj is the best known and joyous and optimisitic. The Dmin is darker: we learnt that Dmin has been described as the "key in which a ghost would speak". Then later, a caprice by Dall-Abbaco written in Ebmaj, an "indescribably gentle" key. Also a Chaconne by Giuseppe Colombi and, at the top, a fascinating introductory piece that was very much out of left field, Reclaiming the spirit by Sarah Hopkins. This work was commissioned and played at the renaming of Uluru and it vividly portrayed Australian bush sounds and the didj. It took mammothly different technique, a readiness to break long training and a regular concert bow to play and was engrossing and convincing. All the tunes had a story as an introduction: a recognition of the local Ngunnawal people; a discussion of the cello's appearance (mid C17th, Italy, as a smaller bass instrument with the new technology of gut strings sheathed in metal); an introduction to Anthony's own 1740s English cello; music as acknowledgement of dark places; of Bach's own history, his loss of 10 from 20 children and his devout religion and composition that was structured in lines with this devotion (eg, in St Matthew's Passion, counted bars, multiplied by the golden mean, bring you to the crucifixion!). All informative but this is not the music. I loved the Hopkins Australian piece, all vivid bush and didj. I was intrigued by Anthony's takes on Bach, light, sometimes flighty across strings, using the more delicate baroque bow. How he paused on the root notes of a phrase, then floated over the arpeggios and scalar phrase that followed. Not the even, determined baroque we sometimes hear or expect moving through exercised sequences, but deeply expressive and delicately phrased, speaking through harmonies of heavenly spheres. Baroque spoken by another age. So, lovely and informed by era and deeply satisfying.

Anthony Albrecht performed at Wesley on his solo Bach to the Bush tour.
Posted by Eric Pozza at 11:34 am