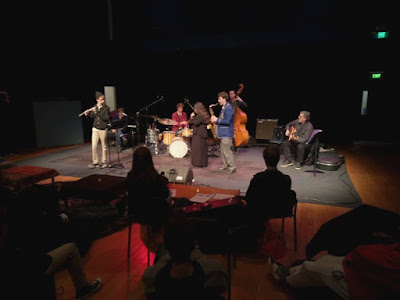 Michelle Nicole and her band started their visit to ANU School of Music with a workshop. First up, the most delicious rendition of There will never be another you. I was stunned. I know Michelle can sing and I remember feeling much the same way last time I heard her, but still I was stunned. A neat band with understated skills, a readiness to move and twist and play together, and a long history to support playing like this. But still I was stunned. Michelle is just so inventive, so involved in her songs, so free with her invented melodies, playing through chords or scales or whatever, but always with purpose and her light and immensely managed voice (I could say agile if it hadn't been appropriated by whomever). Then some talk, mostly from Michelle, but also from the band. Michelle had started on violin and played all manner of bands and plays piano and more but voice is her love, "it's easier" (jokingly, I suppose). She works things out on piano. Geoff talked on the pleasure of the band, not least as a guitarist in a piano-less outfit; of "trying to be more pianistic"; of an interest in all players for their different musical personalities; of freedom to play other than instrumentally-defined roles (alhtugh you are sometimes booked for just this). Finally advising to "get some buddies, stick together, play some music" [ie long-term]. Tom talked of role playing but seeking to stretch. Ronny talked of the 'listening drummer', of finding what's right and being flexible, musical, challenged, but also of an ability to "repeat and act" [essentially, play a groove]. Then from all, some more: develop your ears, transcribe (although not necessarily to paper); jazz as a chamber music, as a "self-organising organism"; a good band will accept members' inventions and play with the risk; "every instrument has its bag of tracks" but take time, enjoy melody and simplicity; slow down, get simple things right; for voice, make a good sounds, be able to sustain a note without vibrato, think like and instrument so voice is a peer. Then some student came up, some talking, some questions, some advice, always open and inviting. Jazz is like that. Commitment is all, improvement is forever.