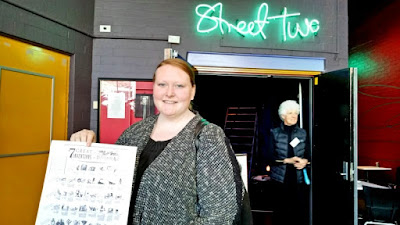 It was a theatre piece about 7 great inventions of the modern industrial age and it finished by musing on the next seven, which has me wondering how they chose this seven. They were telecommunications, aviation & space frontier, advent of convenience (esp household appliances), the mechanical brain, massed world warfare, biomechanics and medical marvels and the advent of film. It's an interesting collection. I'm not a film buff, but they had me thinking there was justification in its inclusion. The performance featured one host, Dene Kermond as Harry Hawkins, with music written by Sally Greenaway and performed by the Syzygy Ensemble. Harry's a genial period person, dressed in fineries and arriving by Zeppelin, leading us through various inventions and implications and provoking both laughs and thoughts. I liked this. He reponded to a mate, Ziggy, , presumably in the Zeppelin, through Morse, and sometimes interacted with the largely mute musicians on stage. Mute ohter than for their performances, which were both musically satisfying and very nicely performed. So, a melange of ideas and text and music with real-world relevance. I liked it immensely with its steampunk presence and vivid filmic musical presence. And I was convinced: "great inventions change us ... what we do and how we think". Even for film, real but fanciful but serving to bring people and cultures together, to promote understanding. There was awareness of good and bad in all this, "horror and hope", as in the best of inventions from war, through being cruel to eachother. And of convenience that saves time, questioned when Harry quizzed on how much spare time the audience has. And I was fascinated that both spyglasses and cyborgs could be associated in that they both extend our abilities. Otherwise, the music. Syzygy comprised a sextet, piano, violin, cello, clarinet, flute, percussion. Largely inert on stage, other than playing, but sometimes reacting. The percussionist played the Morse-coding Ziggy. I have always mused that my grandfather saw the birth of flight to the landing on the Moon, and what a change that was. Now the moon landing is 50-years old (I remember gathering in a hall at school to watch it, ~2.30pm local time). Time passes. The technological goods and bads. Now we fear for the future and climate. So it goes on, until perhaps it doesn't. Entertaining and interesting show - it got me thinking.

7 Great Inventions of the Modern Industrial Age was performed at the Street Theatre. It was composed by Sally Greenaway, written by Magenius (Paul Bissett and Catherine Prosser), performed by Dene Kermond (Harry Hawkins) with music by Syzygy Ensemble.
Posted by Eric Pozza at 4:23 pm