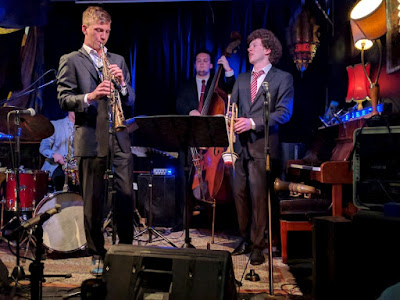 These guys are young but they don't sound it. Their music is of the fifties, perhaps earlier. Their playing is hugely impressive, harking back to hard bop and post bop and Ellington and some originals, not least one that moved forward in time a decade to channel Ornette. They are senior students, mostly fourth year, one third year, from Mount Gambier, somewhat unexpectedly the location of a major Australian jazz school, the James Morrison Academy. They show his influence, too. Hard burning playing of a period, well presented in suits with Mingal whoops and responsiveness to each-others' solos. Hard burning, very well tutored and well practiced. So young, and yet playing like this. Lachlan Karl Hamilton led the band on saxes, with trumpet, bass and drums. No chordal instrument, so an open sound, willingly filled with immensely fat bass playing and drums drenched in dynamics. There were lovely harmonies from the two horns up front, occasional chords, but lots of firm, inventive bass lines, not least those impulsive urgent runs, and the kit that would weave and duck around the time then spatter with a fff cymbal or snare snap. The tenor lines were respectful in melody and closed-eyes exploratory in improv, ably passing through sequences or delaying note to twist melody or just playing the right bluesy line with determination and comfort. Then Matt on trumpet, burbling or blaring, neatly spelling lines but varying them for emotional effect. And Harry behind on bass, urging, driving, fat toned with a two finger pluck and mobile in body as he spelt the changes and grunted his involvement and support. Such a good band, speaking in music of that time, modern yet definitely clearly sourced. They played several originals, that Ornette syled piece, and a few others from Lachlan and one from drummer Patrick. Also a string of Ellington tunes as well as Cedar Walton, Out of nowhere, Vertigo, Misty. There's clear historical reverence here, especially around Ellington. Young ones or Young guns, whatever, they were good. Hot players sitting nicely together. These are guys to watch. 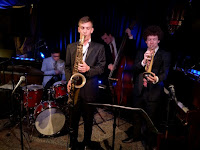 Thanks to Richard Pozza for the main pic
Posted by Eric Pozza at 12:08 pm