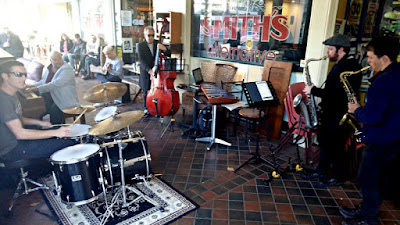 The sun was out but it had been -7degC overnight, so it wasn't hot. Nonetheless, the Smiths jam session was outside on the footpath using the public piano with its keys missing a few ivories. Cool out of the sun but it was a great session. The standard tunes. Josh leading with the house band. Sit-ins included recently relocated Brendan Clarke and Wayne Kelly for Miss Jones. I sat in for Beatrice with Hugh and Mark and Josh and others. Anthony Irving is the house bass: first time I've seen him and I was impressed. He's a leftie playing a bass set up as right-handed; think Hendrix. Some really nice music and good cheer and pleasant in the sun, until it got low and the cold set in. Then it was the end. Much enjoyed.